The Grand Ducal Family of Luxembourg were all in attendance for their nephew/cousin’s wedding. Guillaume’s aunt, Archduchess Marie Astrid of Austria (Grand Duke Henri’s older sister), looked jaw-droppingly elegant in this grey and beige ensemble complete with wide brimmed beige hat. I loved the size and angle of the hat with her short hair so much that I didn’t even notice the too-pointy centre (hidden by an oddly shaped bow).

Marie Astrid’s daughter, Countess Marie-Christine de Limburg-Stirum, wore what looks to be a royal blue transparent fascinator with feather trim. From this distance, I’m not a fan… or maybe I’m just distracted by what seems to be a dress too skimpy for a major royal wedding. 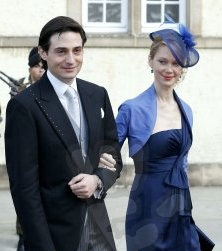 Marie Astrid’s new daughter-in-law, Archduchess Kathleen of Austria, wore a cute purple pillbox with coordinated bow and feather trim. I usually prefer pillbox hats on hair that is neatly tied back into some sort of chignon, but I’ll give Kathleen a pass for her first major royal event as a member of the family. The next person to enter into the Luxembourg Royal Family will be Adelaide Drapé-Frisch, who is marrying Marie-Astrid’s son Christophe this December. Adelaide looked very royal in a salmon pink hat with net bow and wide brim. I loved how the colour of the hat coordinated with her patterned dress and wrap. 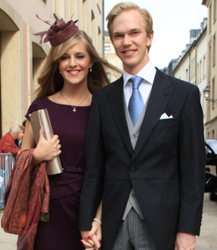 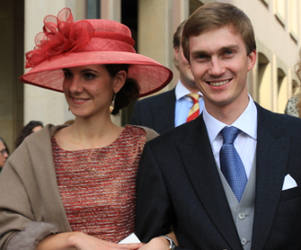 Princess Margaretha of Liechtenstein, Grand Duke Henri’s younger sister, looked beautiful in pale pink. while I didn’t really understand the different shades of pink in her outfit (mauve pink dress, blush pink wrap, dusty rose hat) I loved the hat on its own. Like her older sister, the size and brim shape looked fantastic on her, especially in contrast with her dark hair.

Princess Margaretha’s daughter Princess Marie-Astrid of Liechtenstein (named after her sister, the Marie-Astrid mentioned above in case you’re getting confused!) sported a chocolate pillbox with veil. I loved her hair (see what I mean about pillboxes and hair tied back?!) but found it difficult in the full shot to see where her hair ended and the hat began. I loved her choice of bold earrings- such a modern twist with a retro pillbox!- although the patterned dress, big earrings and hat veil all add up to a lot going on. 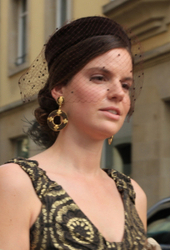 Countess Diane of Nassau, wife of Grand Duke Henri’s brother Jean, showed her allegiance to the Red Hat Society with this red and purple feathered cocktail hat. I think this is a case of too much… in all the wrong places.

Countess Diane’s stepdaughter Princess Marie-Gabrielle of Nassau (daughter of Prince Jean of Luxembourg and his first wife Helene, shown here with her youngest brother, Prince Carl ) wore a large brimmed latte coloured straw hat to match her brocade coat. I’m afraid I find the whole look rather bland – it’s all a little too beige, especially with her dark blonde hair. 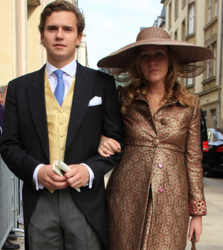 Now THIS is how to do a red hat! Princess Sibilla of Luxembourg, wife of Grand Duke Henri’s younger brother Prince Guillaume (after whom the groom was named) wore a lovely curved red hat with lattice detail on the brim designed by British milliner Dillon Wallwork. Pairing a red hat with a red coat and dress is too much red for my taste, but the hat looked great on her.

Special thanks to The Luxarazzi Blog for assistance on this post.

Photos from Getty as indicated; Stella Pictures and Rex Features