Last Friday, The New Year’s Poetry Reading (Ceremony of the Utakai Hajime) took place at the Imperial Palace in Tokyo. Closeup views of the hats worn to this event again show their beautiful detail, something which I thought warranted a second look!

Crown Princess Kiko Kiko repeated the pale lime silk jacquard floral gown with matching bumper hat she first wore last November for the Rikkoshi-Senmei-no-Gi. It’s an impeccably made piece with cuffed brim covered in wide bias alternating sections of  smooth and smocked silk, the same lime silk jacquard of her gown. Smocking is not something we see on many royal hats and it lends such textural dimension to the piece. Princess Mako repeated her turquoise silk covered bumper hat with, as this picture shows, a wonderful layered, striped silk bow at the back. Princess Kako repeated her lemon yellow silk jacquard bandeau trimmed with silk flowers on the sides.

Princess Nobuko topped her denim blue beaded gown with a matching pillbox covered entirely in feathers and worn back on the crown of her head. It’s a lovely scale and colour on Nobuko and the movement and texture provided by the feathers makes it a fantastic piece to accompany her gown. Princess Akiko repeated her pale yellow bumper hat trimmed in a wrap of pleated crin and generous spray of silk flowers at the back.

Princess Hisako repeated her vibrant green low-crowned bowler hat with curved brim and slim hatband, trimmed wiht a mass of green feathers at the back. The different shades of green on the feather trim makes this hat come alive, linking with the green embroidery on Hisako’s gown and giving the monochrome ensemble lightness and lift.

Princess Hisako's poem was recited at the New Year's Poetry Reading (Ceremony of the Utakai Hajime) on March 26, 2021.

The only new hat at this event was an ice blue, short-brimmed design on Princess Tsuguko. The small scale design gets visual impact from the trilby-esque curved brim and hatband of silk leaves that encircle it, linking with the vine pattern in the silk jacquard of her jacket and skirt. It looks to me like the hat is covered in plain silk and the leaves cut from the printed jacquard silk (same as the gown), a subtle touch that makes the all blue ensemble less one note.

Designer: unknown
Previously worn: I believe this is new

Again, these closer views of these hats show great detail and utterly impeccable finishing. They are so very, very,  beautifully made.

Which hats here stood out most to you?

Images from social media as indicated

The Imperial New Year’s Lectures (Ceremony of the Kousho Hajime) were finally held Tuesday at the Imperial Palace in Tokyo.

Crown Princess Kiko repeated a grey-blue silk brocade gown with shimmering beaded bodice. Her half hat, in the same silk, features crisp pointed corners on each side and stripes of slim silver beads across the crown. Princess Mako repeated an ice blue silk jacquard and matching half hat with short, upfolded brim. The closeup photo seen below shows beautiful detail on the hat- tiny sparkling beads around the brim edge like those around the collar of Mako’s gown, and the loveliest white and blue silk flowers. Princess Kako rounded out the Akishino’s trio of blue in her deep royal silk gown and matching bumper hat with intricately beaded brim edge.

Princess Nobuko paired her terra cotta pink gown with an oversize silk floral headpiece. It’s a departure from much of the Imperial millinery we see, making it a favourite for me!

Princess Akiko Princess Yoko repeated pillbox hats, Akiko’s in lime-yellow silk with beaded detail on the side and Yoko’s in salmon pink with layered stripes of feather trim.

Princess Hisako wore a deep purple stylized bowler hat with ostrich plume at the back. The lattice printed silk of her gown is repeated on the hat’s wide hatband. Princess Tsuguko repeated her green silk jacquard covered pillbox hat with layered sash across the top of the hat embroidered with the same vine pattern as on the collar of her gown. The lily-of-the-valley blooms that originally embellished this hat have been removed, a detail I’m a little sorry to see.

The views of these hats show more detail than we usually see and my, are these details impeccable. The beading is particularly fine and makes me wish we could see all Imperial hats at close view simply to admire how beautifully they are made.

Princesses Nobuko, Akiko, and Yoko of Mikasa
Princesses Hisako and Tsuguko of Takamado

It’s been a long while since we had such a group of hats to admire- which designs here stood out most to you?

Images from social media as indicated

On Tuesday, the Akishino princesses arrived at the Imperial Palace for a Rikkoshi-no-Rei luncheon in silk covered bandeau headpieces.

The Countess of Wessex has shown her support to @Girlguiding and @BBCCiN and completed her own #ActYourAge challenge. HRH, President @Girlguiding, put on her apron to earn a Pudsey badge and baked 55 cheese & bacon scones earlier this week! 🧀🥓 pic.twitter.com/mbvoV8U1R7

Now…. how many of you started the new season of “The Crown” yesterday? Thoughts?

Last Sunday, the Imperial royal family celebrated Rikkoshi-Senmei-no-Gi, the final ceremony in the Emperor’s enthronement that officially proclaims the new crown prince which had been postponed seven months due to the global pandemic.

Empress Masako arrived early in the morning to prepare for the day of ceremonies in her oyster silk covered bumper hat.

November 8: Empress Masako arrived at the Imperial Palace after 7am. Emperor Naruhito arrived after 8am. The Empress needs time to change into traditional clothes. They worshipped and reported the "Rikkoshi no Rei" after 9am.
📸 https://t.co/yQ7HmRH3kc
📸 https://t.co/x1C0JnUI92 pic.twitter.com/c6QnNCvfGF

Crown Prince Akihito and Crown Princess Kiko followed an hour later, Kiko in a pale lime silk jacquard floral gown with matching bumper hat. The cuffed bumper brim on this design is covered in wide bias stripes of smooth silk and silk smocked in the same fine pattern as the waist on Kiko’s dress. This smocking gives some textural dimension to the hat, especially when punctuated with the small shiny silk stripe between each section. While a subtle detail, it is impeccably executed and once again, shows incredible quality and millinery skill.

November 8: Crown Prince Akishino (Fumihito) and Crown Princess Kiko departed around 9:15am for the Imperial Palace to attend the "Rikkoshi no Rei" ceremonies. They were seen off by Prince Hisahito.

Imperial family attend Rikkoshi-Senmei-no-gi (Proclamation of the new Crown Prince) on November 8 at 11am.

Members of the extended Imperial Royal family were in attendance, the ladies in court dress (gowns and hats). 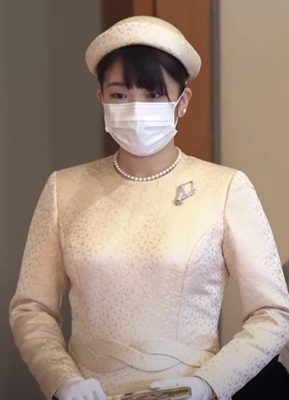 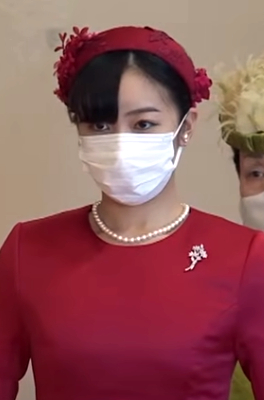 Princess Nobuko’s hat previously worn: Feb 23, 2020
Princess Akiko of Mikasa wore a lemon yellow bumper hat wrapped in a swath of pleated crin and trimmed with a spray of silk flowers across the back. Princess Yoko repeated a pale coral textured pillbox.

Princess Akiko’s hat previously worn: Oct 25, 2019; Apr 10, 2019
Princess Yoko’s hat previously worn: Oct 25, 2019; Apr 10, 2019
Princess Hisako wore a standout hat with crown in the same vibrant green silk as the cuffs on her gown. The hat’s cartwheel brim appears to be  covered in overlapping ombre leaves and an overlay of veil. Princess Tsuguko repeated her burgundy bumper hat with veil and side silk floral trim.
a

Following the ceremony, the Crown Prince and Princess worshipped at Kashiko-dokoro shrine which is located on the grounds of the Imperial Palace. They were joined by several of the Imperial princesses who wore pale gowns and repeated ivory hats.

Princess Akiko and Princess Yoko of Mikasa at the Three Palace Sanctuaries after the "Rikkoshi-Senmei-no-gi" ceremony on November 8, 2020.
📹 https://t.co/NG9Vzqphqw pic.twitter.com/ptyiAlf1FO

The food at the Choken-no-gi ceremony is purely ceremonial. It's not eaten.

Lady Gabriella Kingston, the daughter of Prince and Princess Michael of Kent, makes her singer-songwriter debut as she releases first singleshttps://t.co/qu3wMBYDnJ

Leah Behn was confirmed yesterday at Jar church, in a traditional Norwegian folk ‘bunad’, with her extended family in attendance