For the occasion, the Queen debuted a new hat. In medium pink parasisal straw, the design features a sloped crown and upturned kettle brim, slightly raised on one side. The hat is trimmed with slim straw and felt overlapping hatbands tied in multiple side bows and a single, curving quill.

The top of the crown is blocked in a pair of indented crescent swirls around one side that gives beautiful movement to the piece.

The colour is lovely on Her Majesty, as is the gentle slope of the crown and brim. I think I’d prefer some more contrasting trim however- I’m a bit worried that when this dress’ matching coat is added (because there’s always a coat!), it’s going to be an overly monochrome look. We’ll have to wait and see.

I was hoping we’d see a new hat on the Queen this weekend and she did not disappoint. What do you think of this new pink design?

The Queen’s Colour of F Company Scots Guards was trooped at Windsor Castle today to celebrate Queen Elizabeth’s official birthday, followed by a flypast by the Red Arrows.

For this event, the Queen repeated  the same grey hat we saw her wear a few weeks ago to the opening of parliament. The design features a flared crown covered in silk cloque fabric and a mushroom shaped straw brim overlaid in pleated crin and is trimmed with a grey goose feather mount and vine of gold silk flowers that wrap around the front that echo the floral applique around the neckline of her coat.

It’s unusual to see the Queen repeat the same hat within such a short timeline, to two high-profile events. We’re also used to seeing Her Majesty in a colour that sets her out in a crowd and this grey ensemble uncharacteristically blended in. I was hoping for a bright new chapeau today and while I’m a bit disappointed, rumours are swirling that we’ll see the Queen next week at Ascot where she usually debuts a few new hats.

The Queen was joined by her cousin, the Duke of Kent. The texture of his hat looks to be faux fur (the British military no longer uses real bearskin pelts for their famous dress uniform hats).

This is the second year running that we’ve seen a mini Trooping the Colour at Windsor Castle- next year’s event will be celebrated as part of the Queen’s Platinum Jubilee and it will be wonderful to see a return to the full event complete with  the Queen and her family back on the balcony of Buckingham Palace.

74 years to this day in 1947 when Princess Elizabeth visited Radley College in Oxfordshire in this most interesting bonnet design with flat frown and ruffle trimmed brim.

Our thoughts and well wishes are extended to the Queen today, on what would have been Prince Philip’s 100th birthday.

We wrap up Jake Short’s fascinating series on Hawaiian royal hats with a fifth and final installment today. Jake is a longtime Royal Hats reader and contributor and a very stylish hat wearer who you can follow  on Instagram or Twitter @bestdressedmenno. If you’ve missed his previous posts, link to all of them at the bottom. Immeasurable thanks, Jake for this fantastic series!

Claims To The Throne

Who is considered the heir to the Hawaiian throne nowadays is contested. Some consider Quentin Kūhiō Kawānanakoa, grandson of Abigail Kapi‘olani Kawānanakoa, to be the heir as his is directly descended from Prince David Kawānanakoa through primogeniture.

Others say the heir is Abigail Kinoiki Kekaulike “Kekau” Kawānanakoa, seen below in a panama straw porkpie hat with a blue feather hatband).

Abigail Kekau is the daughter of Lydia Lili‘uokalani Kawānanakoa pictured below, who was the younger sister of Abigail Kapi‘olani. Abigail Kekau was hānai adopted in 1932 by her grandmother Princess Abigail Campbell Kawānanakoa with the idea she would be direct heir, hence why it is argued she is the correct heir.

If Abigail Kekau was to succeed to a restored Hawaiian throne, she would be the world’s second-oldest monarch (Queen Elizabeth II is only two days older) and also the first openly lesbian queen. Abigail Kekau also served as president of the Friends of ‘Iolani Palace organization for almost 30 years.

Outside of the Kawānanakoa claims, Owana Ka‘ōhelelani Salazar asserts she is the true heir to the throne due to her family lineage and connections to the Royal School created by Kamehameha III in 1848. Before her death in 1988, Princess Helena Kalokuokamaile Wilcox named her daughter Owana and Owana’s son Noa as her direct heirs. Neither Abigail Kekau nor Quentin Kawānanakoa seem very interested in pursuing monarchical restoration; in contrast, Owana does so intentionally by interacting with other deposed royal houses from around the world, and bringing back the Hawaiian royal orders (although thus far not wearing royal hats, or at least not any I could find).

Remember there was the possibility of a Hawaiian princess marrying into the Japanese Imperial Family? Despite never happening, there have been many Japanese immigrants to Hawai‘i in the last two centuries, and there is still a strong bond with Japan. As such, members of the current Japanese Imperial Family have visited Hawai‘i on several official occasions, often wearing hats. 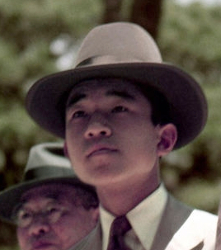 Akihito returned in 1960 with Crown Princess Michiko, who wore a typical 1960s-style cloche; the next day Michiko wore a traditional kimono, but Akihito carried an optimo-style panama straw hat. A 1966 visit saw Michiko wearing a stylized pillbox/bumper hat; other visits during the 1970s and 1980s by other Japanese royals (including Emperor Hirohito in 1975) saw no record of hats worn in Hawai‘i.

In 1994, Akihito and Michiko returned as Emperor and Empress of Japan, the Empress arriving in one of her signature wider saucer hats.

Later that day and the next, she wore a pair of her signature pillbox percher hats. Both in ivory, the first was a shorter version covered in ivory silk flowers and avocado silk leaves. The taller design, worn June 24, 1994, was trimmed in an ivory and black bow to match her suit. 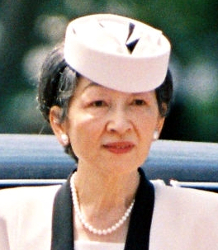 The following day, June 25, 1994 saw two hats on the Empress: first a pale blue small disc hat with a large rose trim, and then a very wide disc hat with a rose and leaves trim on the front when they departed. 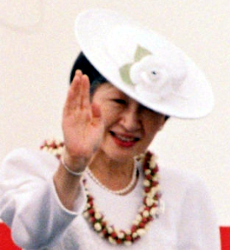 A final visit in 2009 saw another wide disc hat trimmed with a large navy blue silk bow, along with one of my favorite all-time hats for Michiko: this wider disc hat with flowers and leaves that coordinates perfectly with her raspberry and black outfit. 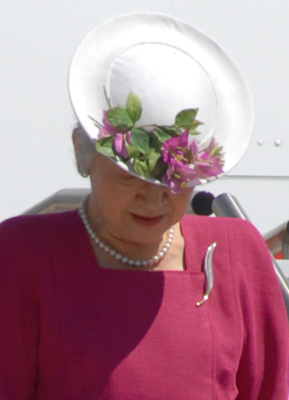 During a 2018 visit to Honolulu with Prince Akishino, Princess Kiko wore a simple and sophisticated navy blue straw hat and the couple were photographed in Hawaiian leis.

With the overthrow of the monarchy, the once strong connections with British royal family all but vanished (Hawai‘i’s flag does include the Union Jack due to these historical ties). But Hawai‘i has seen a few visits from the British royals since it became a U.S. state. On 27 March 1963, Queen Elizabeth II and Prince Philip were greeted by then-Governor John Burns; the Queen wore a smaller Breton-style hat during this visit

A few years later in 1966, the Queen Mother visited Hawai‘i and danced the hula with famous surfer Duke Kahanamoku in one of her typical petal turbans. Duke Kahanamoku was born in the last years of the Kingdom of Hawai‘i and was named after his father Duke, who was christened so after Prince Alfred, Duke of Edinburgh, visited Hawai‘i; Kahanamoku was also part of a lesser noble Hawaiian family and apparently also taught the Duke of Windsor (then Prince of Wales) how to surf when he visited in 1920. The Prince and Princess of Wales briefly visited Hawai‘i in 1985, although sans hats.

It remains a sad part of history the Kingdom of Hawai‘i is no longer with us today for many reasons, including for us at Royal Hats not having more possible hats to admire. With decades of close relations with the British, one can only imagine what those may have looked like today; would Hawai‘i be part of the Commonwealth today? Or what if deeper connections with the Japanese Imperial Family had been pursued further? (This is especially interesting when you consider how a continuing independent Hawai‘i or a Hawai‘i as head of a Polynesian federation would’ve changed the course of history, including WWII.)

While the number of hats sported by Hawaiian royals was not vast, it is much more numerous than one might expect, and that’s of course only what was photographed at the time. As a final additional side note, the Daughters of Hawai‘i, a group dedication to the historic preservation of Hawaiian royal palaces, have been seen many times wearing all-white ensembles, including white portrait hats.

I have not visited Hawai‘i yet, but I hope to one day get there and see places of historical importance like the ‘Iolani Palace. Have you been to Hawai‘i? Were you aware of all this history? I hope you’ve enjoyed this unique look at the Royal Hats of Hawai‘i as much as I did discovering them.

Thank you Jake, for all of the research and thought put into this series. It has been insightful, engaging and educational. I have one thing to add- a photo I took in 2017 at The Bernice Pauahi Bishop Museum, designated the Hawaiʻi State Museum of Natural and Cultural History, in Honolulu. These hats were from the Hawaiian Royal Collection- I’m afraid, at the time, I was more intrigued by the beautiful and intricate woven pattern than I was at who had worn them. If anyone has  further information they can share, please do!

Stay tuned later this summer for another series from Jake! His previous guest posts at Royal Hats include:

The Queen was at HM Naval Base in Portsmouth today to bid farewell to aircraft carrier HMS Queen Elizabeth ahead of its maiden voyage. The ship, which carries eight RAF and 10 US F35B stealth fighter jets on board, is on a 28-week operational deployment to the Philippines for its first operation, accompanied by six Royal Navy ships, a submarine, 14 naval helicopters and a Royal Marine company.

For this sendoff, the Queen wore a new red cashmere coat with black velvet collar and buttons and matching hat.

The hat’s indented crown gently slopes to just above average height, the scale balanced by its cartwheel brim and high-contrast layered black and red hatbands. The hat is trimmed with an open red silk rose, rosebuds and green velvet leaves.

It’s not the first hat we’ve seen with that punchy black hatband stripe which is good news, because it works so well. We’ve talked before about coat necklines and how they add (or detract from) a hat’s success and this sharp black velvet collar is a winner, giving a beautiful base for the hat.

This new hat is a standout for me  (it certainly stood out amidst today’s sea of navy uniforms!)- what do you think of it?