In addition to the Kent family, Gloucester family and British royal family, Saturday’s wedding of Lady Gabriella Windsor and Thomas Kingston was also attended by a number of foreign royal guests. King Constantine and Queen Anne-Marie of Greece were spotted arriving, the Green queen in a repeated her ecru and gold woven straw pillbox with whimsical, looped side bow.

Our friends over at Luxarazzi spotted Prince Philipp and Princess Isabelle of Liechtenstein among the guests. Princess Isabelle wore a wide-brimmed black straw hat with ruched brim overlay studded in pink silk flowers.

The Bulgarian Princess of Turnovo wore a large percher headpiece in pale grey crin. We don’t see Miriam at many royal events (especially after Prince Kardam’s passing in 2015), it was lovely to see her again on Saturday.

The bride was photographed in familiar embrace with Brazillian Prince João Henrique of Orléans and Bragança. His wife, Claudia, paired a mustard dress with a natural straw vertical saucer hat trimmed in slim multi-looped bows both above and below the raised side of the brim.

Scrolling through the gallery below brings up photos of several more Brazilian princesses. Duchess of Segorbe, Princess Maria da Gloria of Orléans-Bragança topped her green dress with a soaring, waved natural straw hat trimmed with what looks like a silk abacca hatband and flying bow tails (a Brazillian princess by birth, Gloria was the first wife of Prince Alexander of Serbia but is now married to the Spanish Duke of Segorbe).  Princess Yasmin of Orléans-Bragança paired her red dress with a matching circular layered headpiece in red crin.

While not royal, a number of noteable guests at this wedding also included:

A post shared by 💖The British Royal Family💖 (@the_house_of_windsor)

That wraps up our look at the hats worn to Lady Gabriella’s wedding. Please share ones not covered here that caught your eye in the comments below.

The marriage of Princess Alix de Ligne and Count Guillaume de Dampierre took place on Saturday in the Beloeil municipality of Belgium.  After the ceremony at St. Peter’s church in the village of Beloeil, an outdoor afternoon reception and evening banquet were held at Château de Belœil, the thirteenth century home of the bride’s paternal family. Princess Alix’s mother was born Princess Eleonora of Orléans-Braganza of the Brazilian royal family and her father is Prince Michel of Ligne (the House of Ligne is one of Belgium’s oldest noble families, dating back to the eleventh century) whose mother was born Princess Alix of Luxembourg (youngest sister of Grand Duke Jean of Luxembourg). This post over at the Royalement Blog gives a great introduction to the couple.

Designed by Belgian designer Gérald Wathelet, Princess Alix’s ivory silk gown featured a square neckline, embroidered cumberbund at the waist, and softly draped  skirt that flowed into a short train. What made the dress stand out among all other royal wedding dresses in recent memory, however, was its fringe trim on the sleeves and around the waist. I thought the pairing of this fringe with Belgian lace was completely unexpected and that it worked, thanks to the otherwise clean lines of the dress. 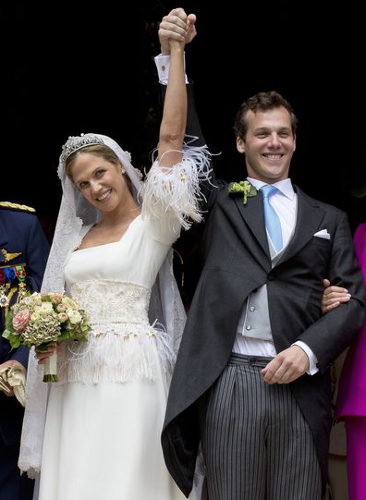 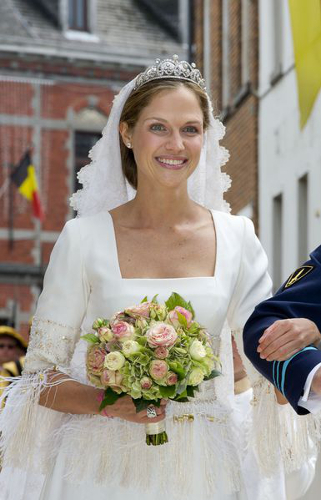 Princess Alix topped the dress with a Belgian lace veil circa 1810, anchored with the de Ligne family diamond tiara. 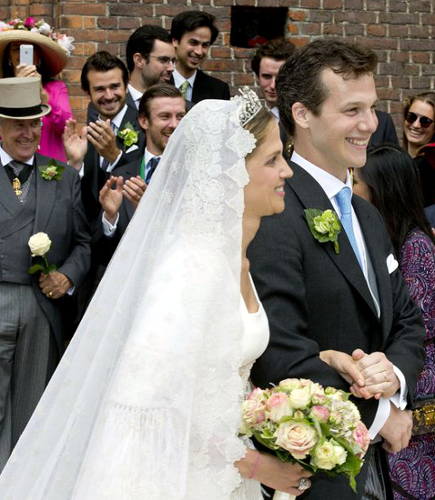 The bride’s mother, Princess Eleanora, topped her pink lace dress with a pleated straw headpiece from Fabienne Delvigne. The hat is entitled “Poppies” and is described by the designer as “made of pale pink banana fiber with matching clutch bag also in banana fiber.” 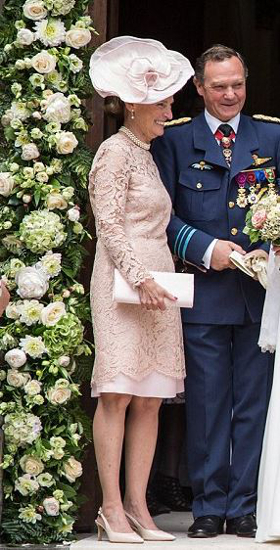 The groom’s mother, Roseline Alvare de Biaudos de Casteja, stood out in a fuchsia silk and lace pant suit topped with Fabienne Delvigne’s “Agatha” hat in fuchsia banana fiber. The hat’s main feature is its soaring, upswept brim. On its own, the bold hat would make quite a statement…. as part of this fuchsia brim-to-hem look, it’s a little lost in the shouting.

There were more than 800 guests at the wedding, including members of numerous royal houses. Jump over to this post to see hats worn by members of the Grand Ducal Family of Luxembourg  and this post for hats worn by other royal guests.

Photos from Valentin Dupont, author of Royalement Blog and Rex/Shutterstock 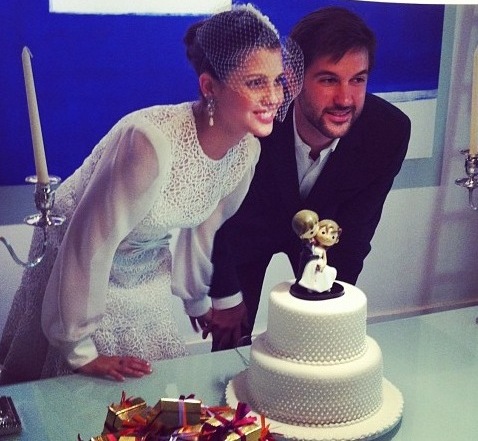 For her religious wedding this past weekend, Princess Yasmin of Orleans-Braganza (as she is now known) wore a voluminous net veil to compliment her off-the-shoulder gown. The veil was anchored by two large silk flowers on either side of her chignon. It was one of the most creative royal bridal veil/headpiece combinations I have ever seen and I liked the overall effect.  A gallery of the religious wedding can be viewed here. 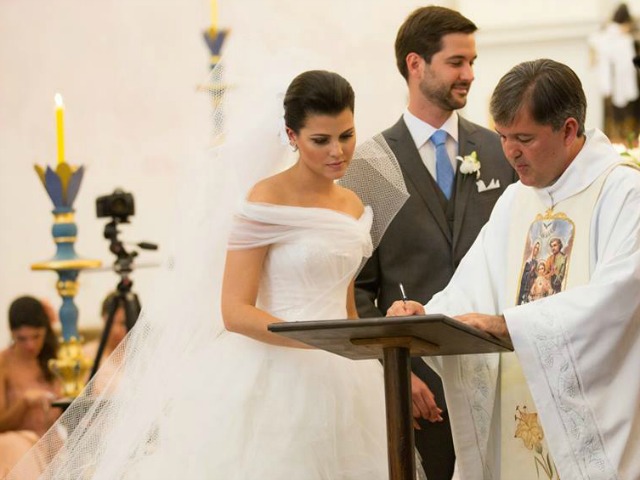 The Brazilian Royal Family was deposed in 1889 and its members hold no ceremonial duties (like many of the other deposed royal houses). I believe the couple will reside in Rio where João Philippe works in business and Yasmin, who studied Industrial Design at the Catholic University of Rio, is a fashion designer.