Emperor Akihito and Empress Michiko departed Haneda international airport in Tokyo yesterday en route to a week long official visit to India. Empress Michiko wore one of her regular petite saucer hats, this one in cream, trimmed with a black and cream silk bow. I believe this hat is a new one. 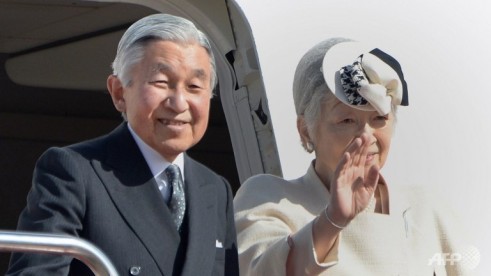 The Imperial couple were seen off by their sons and daughter-in-laws. Princess Kiko wore a chocolate bowler hat trimmed with a black ribbon around the crown (another new hat, I believe) while Crown Princess Masako wore a dove grey wool hat with square crown, rolled brim and grey ribbon around the crown. Paired with her suit, I thought Masako’s hat (which I suspect is also new) looked great on her.

Prince Akishino and Princess Kiko’s daughter, Princess Mako of Akishino, also was on hand to bid farewell to her grandparents. Mako wore a squared version of her mother’s bowler hat, with a slightly more upturned brim.