45 years ago today, Prince Charles was invested as the Prince of Wales.

On July 1, 1969, the 20-year-old Prince received the insignia as the 21st Prince of Wales from the Queen at an outdoor ceremony before 4,000 guests at Caernarfon Castle in north-west Wales. The medieval castle was inspiration for the visually austere ceremony (directed by Princess Margaret’s husband Lord Snowdon, who designed the set and decor).

The Queen’s hat, in pale yellow silk, was inspired by a Tudor era French hood and designed by Simone Mirman. The crown was embroidered with seed pearls and the attached hood, with hand stitched pleats, wrapped around the back of the Queen’s head. The hat had a distinctly round overall shape and remains one of the more unusual pieces in the Queen’s millinery past.

The 2016 exhibition “Fashioning a Reign: 90 Years of Style from The Queen’s Wardrobe” provided a fantastic, close-up view of this hat, confirming its pale yellow colour and a level of execution that is astounding. Jump over to this post for our 2016 discussion on this hat. 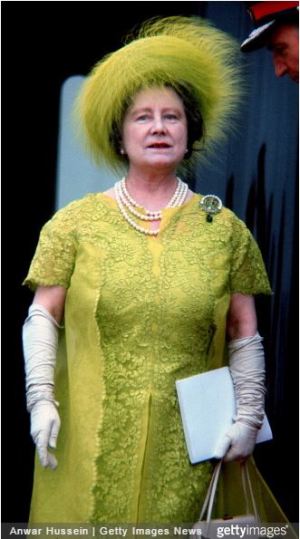 While Princess Anne’s hat, a large turquoise pillbox designed by John Boyd, was a more timeless shape, the giant circle of turquoise and white ruffles at the back firmly dates it in the late 1960s as well.

I adore all three hats for the bold style statements they individually made (and have always wondered if Lord Snowdon assigned them each a colour to coordinate with the heraldry hanging around the castle!).

There is no question these hats are from the 1960s- the colour and style of both hats clearly reflects the fashion of this time.I am curious to hear your thoughts on these hats, particularly as they seem rather stuck in time and I suspect, have been forgotten.

** While the Duchess of Gloucester, the Duchess of Kent and Princess Alexandra also attended this ceremony, photos of them seem to be scarce. Any links you can provide would be most helpful.

33 thoughts on “Hats From The Past: The Prince of Wales’ Investiture”