Crown Princess Mary of Denmark is the mother of royal twins, Prince Vincent and Princess Josephine. You might be surprised to see she has another set of twins:

It is the same hat with tall, square wool crown and woven straw brim. The slight curve in the brims are the same, as is the double feather trim (perhaps, slightly longer feathers on the black hat). The only difference between these two Susanne Juul designed has, as far as I can tell, is the colour. Interestingly, Mary also has a third version of this same hat shape made entirely of pale pink straw. While it’s not an exact twin of the first two, it’s a closely related little sister. I have always thought this particular hat shape is a fantastic one for Princess Mary and she wears it very well. 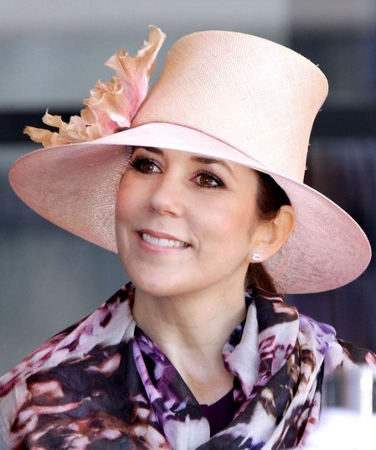 This phenomenon intrigues me to no end- are the hats purchased together? Do royals go back to their milliners and ask for another model of the same hat? What causes someone to make this choice when there are countless other hat styles and options available to them? It’s interesting to ponder, isn’t it?