Empress Michiko hosted a Folk Music Concert at the Concert Hall inside the Imperial Palace yesterday to celebrate Emperor Akihito’s 80th birthday. This concert was attended by the Emperor’s immediate family and the Takamado Princesses. Crown Princess Masako wore an ivory Breton style hat with characteristic upturned brim nearly as high as the crown of the hat. This silk hat appeared to be without embellishment. 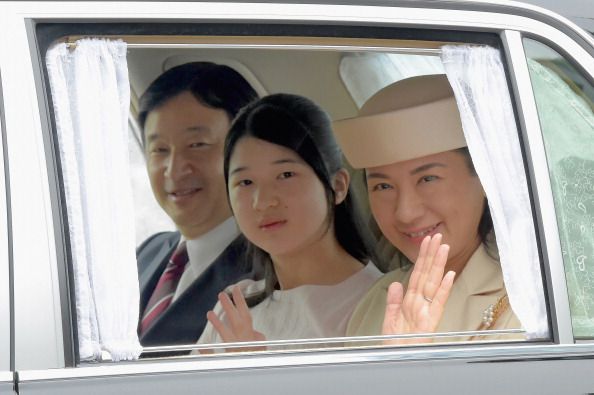 The three young Takamado Princesses, seated behind the Emperor and Empress, wore predictably demure hats. Princess Ayako wore a pale blue bumper hat with silk rose trim on the side and Princess Noriko wore a large white silk hard-shelled beret, also with silk rose side trim. Princess Tsuguko’s hat was a little less predictable in bronze straw with a wide cream and band around the crown.

Princess Hisako of Takamado (second row, middle below) wore a pale blue hat with square crown. The crown appeared to be made of the same pale blue printed fabric as Hisako’s suit jacket. On Hisako’s right was Princess Mako in a white hat with square crown, rolled brim and wide sash around the crown. Mako’s mother, Prinkess Kiko (front row, right) wore a turquoise blue hat with brim tightly rolled up against the crown of the hat. Her hat was a much needed pop of colour amid the Imperial sea of neutral hats. 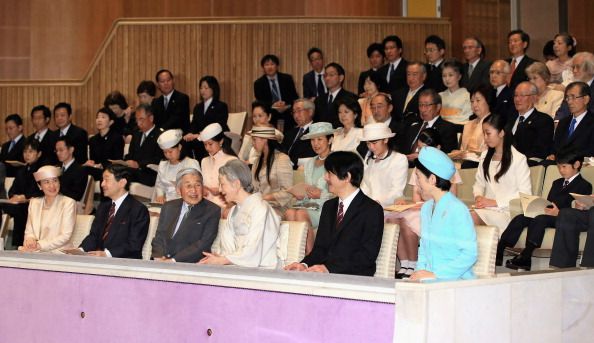 My favourite hat in this bunch was the bronze straw hat worn by Princess Tsuguko. Which one here strikes your fancy?