On January 14, members of the Imperial Royal Family attended the annual New Years Poetry reading held at the Imperial Palace. You can read English translations of some of the poetry at the Imperial Household Agency website.

The Imperial Princesses all attended this event in traditional court dress. Princess Kiko led in a bumper hat made of the same pale blue silk as her gown. Worn back on her head, almost like a calot, her hat was trimmed in a bow at the back. I’m afraid the effect, combined with her 1980s style of gown, was rather twee. 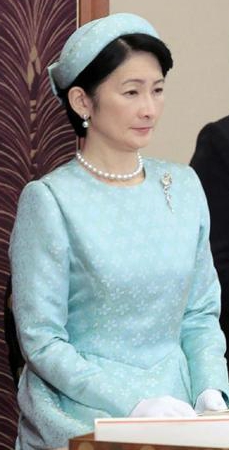 Princess Kako topped her buttercup yellow jacquard gown with a coordinating headpiece. The puffed Alice band, trimmed with silk blooms behind her ears, worked well on the young princess and contrasted nicely with her dark hair. Having just come out into her royal life, Princess Kako is new to the world of royal millinery and this embellished headband made for a good “starter piece”.

Princess Hanako of Hitachi repeated her dark green velvet hat with clamshell-shaped bumper brim and ostrich feather trim. I adore this theatrical hat because it stands out amid the rather sedate millinery choices we usually see on Imperial royal heads. It is also a beautiful compliment to Hanako’s forest green velvet gown.

Princess Nobuko looked elegant in a pale grey structured gown topped with a coordinating pillbox hat. The pleated sides of the pillbox provided great contrast to the sleek lines of her gown (a phrase I never thought I would write about a member of the Imperial family!). Her daughter, Princess Akiko, repeated her lime green rounded pillbox hat. 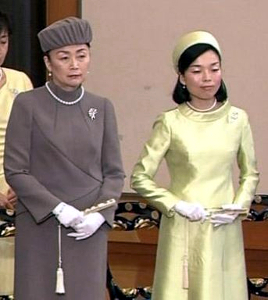 Princess Hisako of Takamado repeated her deep purple bumper hat with feather trim at the back while her daughter, Princess Tsuguko, looked to be wearing a stunning headpiece of overlapping leaves in various shades of purple, trimmed in gold. 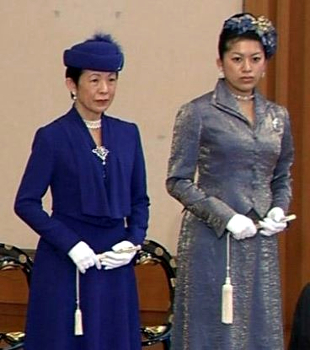 A close up of Princess Tsuguko's floral headpiece from the 2015 Poetry Reading.
Google found it somewhere in this Japanese forum https://t.co/DaFtDd2LKp pic.twitter.com/HQfykbcJV6

Did any of these Imperial royal hats stand out to you?

Photos from Asahi and Sankei