The Duchess of Cornwall attended The Royal Artillery Gold Cup races held at Sandown Park in Esher today. For this informal day out, Camilla understandably chose an informal (and warm!) hat. Describes by the designer as a”ruched crown showerproof tweed hat with faux-fur cuff”, we have seen Camilla wear several different versions of this hat numerous times. I think this version is most successful – the colouring is lovely on the Duchess and the hat coordinates nicely with her tweed coat. If she had worn this to a formal royal engagement I would not be so complimentary but for for a wintry day of leisure outdoors, I think this cozy hat works rather well. 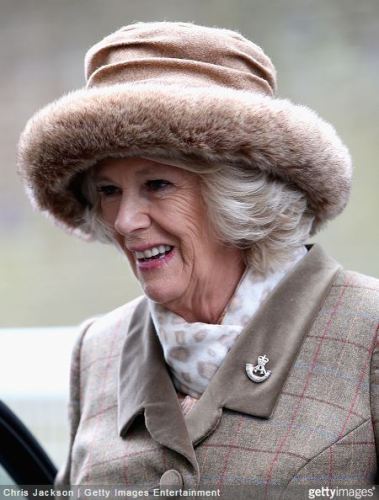 Photos from Getty as indicated. Click on each photo to link with the original source.

14 thoughts on “Duchess of Cornwall Enjoys Day At The Races”