Queen Elizabeth was all smiles this morning during her and the Duke of Edinburgh’s departure from Berlin. I would like this had something to do with her new hat, a wonderful piece in palest yellow and grey. Made from what appears to be a straw brim and silk covered crown, the chic hat was trimmed in wide grey piping around the upturned brim and a spray of yellow and grey ombre feathers on the squared crown. The colour combination is a departure for Her Majesty and the hat beautifully balanced her grey dress and yellow coat. I think it’s just lovely.

Designer: It looks like Angela Kelly
Previously Worn: This hat is new

The British Royal visit took a more sombre note later in the day as the Queen and Prince Philip paid respects to victims of the Holocaust at a former concentration camp near Bergen-Belsen. The Queen replaced her yellow coat with an embellished one in grey and white (presumably, both made to match the grey dress below), over which she topped a charcoal grey  and pale blue hat. In the shape of a square-crowned cloche, the main trim of the hat is an austere band of charcoal flannel wrapped around the side of the crown. While I preferred the first of today’s two new hats, I thought this one was a very suitable choice for this engagement. It coordinates beautifully with the Queen’s grey coat, doesn’t it? 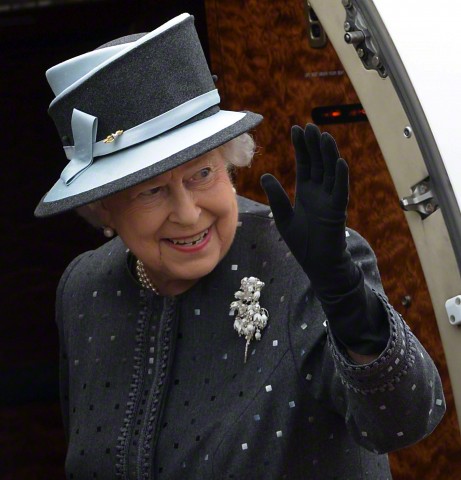 Designer: Angela Kelly
Previously Worn: This hat is new
While this concludes the British state visit to Germany, it is the second day in a row the Queen has worn two new hats. I can’t wait to hear what you think about them!
Photos from Getty as indicated; Peter Steffen/dpa via Corbis

21 thoughts on “Fourth Day of British Royal Visit to Germany”