It was no surprise that birthday celebrations for King Carl Gustaf this weekend included attendance by members of the extended Swedish Royal Family, many of whom wore hats and headpieces for the daytime events.

Princess Christina topped her blue jacquard suit with a feathered flower fascinator in the same hue. It’s not the most exciting of headpieces (I suppose it does have a festive vibe that fits well with this celebration) although the colour is lovely against her hair. 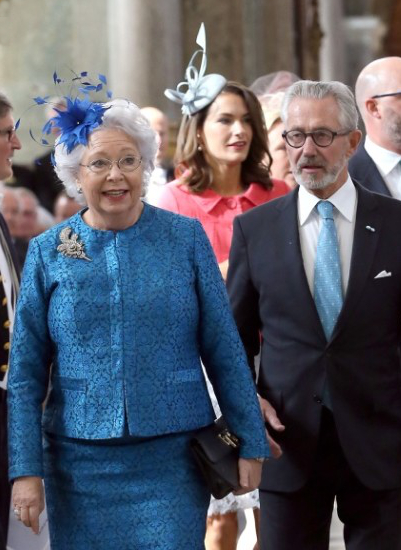 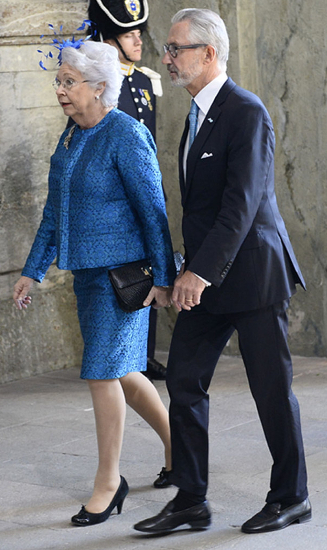 Princess Christina’s three daughter-in-laws all wore cocktail percher hats. Emma Magnuson (seen above and below) chose a grey straw beret based piece with multiple bow loops and a soaring ribbon tail that coordinated with her grey lace skirt. Frida Bergström (below right) topped her floral dress with a white-rimmed grey saucer hat trimmed in silk roses while Vicky Magnuson (lower photo) wore a pale pink cocktail hat with beret base trimmed with a large bow and net tulle veil. Although the pink hat errs on the saccharine side of the spectrum, I thought it was a light and airy compliment to her navy dress. 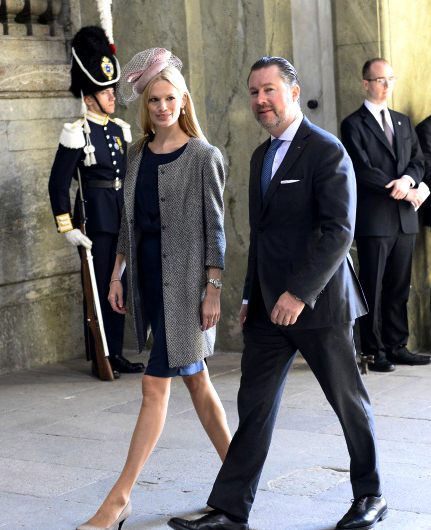 Princess Birgitte, who I can’t remember wearing a hat in a very long time, surprised in this round grey percher design. With sharp white piping and a bedazzled button anchoring two large feather spines, the hat is bold and decidedly modern. I’m not sure grey was the best colour for Princess Birgitte but I’m going to ignore this quibble since she’s actually in a hat.

The King’s other two sisters, Princess Margaretha and Princess Désirée (seen above in the yellow dress), did not wear hats for this event. His aunt, Countess Marianne Bernadotte of Wisborg, attended in a gold brocade suit that she paired with an elaborate fascinator. Made up of large silk blooms and arrow trimmed gold feathers, the piece topped off a wonderfully regal and rather luxurious ensemble.

Finally, Maline Sommerlath (wife of Queen Silvia’s nephew Patrick Sommerlath), wore an ecru straw fascinator made up of multiple bows and coordinating feather trim. The amazing pleated yellow and white hat worn by Princess Hisako of Takamado is something we’ll discuss more in the next post as we look at the hats worn by royal guests.

While none of the King’s extended family wore pieces as large or dramatic as his wife and daughters, this group includes some lovely pieces. Which ones here stand out to you?
Special thanks to Sofia Svanholm for giving permission to sharing her fantastic photos of this event. I encourage you to peek at her blog and gallery of photos taken this weekend.
Photos from Getty as indicated; TT/Stella, SVT1 Screen shots and Sofia Svanholm