Earlier this week, I was doing some hat related research related to “Fashioning a Reign: 90 Years of Style from The Queen’s Wardrobe” and came across the Royal Collection Trust’s entry of the following famous hat. 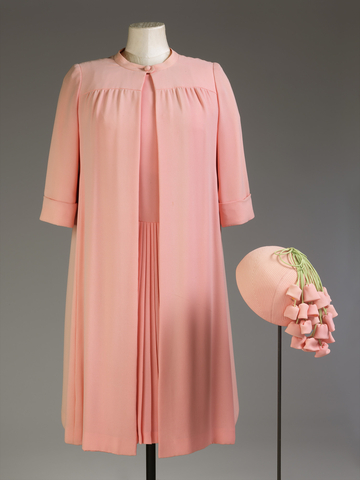 Interestingly, the Royal Collection named this hat as the design of Simone Mirman. This immediately piqued my interest as this hat has widely been reported for many years as the work of Frederick Fox. When he passed away in December 2013, numerous sources cited this hat as Fox’s most famous design for the Queen of the 400 hats he made for her over the 40 years they worked together (see articles at The New York Times, The Telegraph and Hat Life).

This set my research sniffers into action so I sent an inquiry to the Royal Collection Trust. Yesterday, I received a note back that the hat is undeniably the work of Simone Mirman- undeniably, as the the collection curator shared, because the hat has a Mirman label is inside of it.

Thus, I need  to issue a full correction with my sincere apologies- this famous hat was made by Simone Mirman. The original feature post of this hat has been corrected accordingly.

I’m incredibly curious about this hat’s long and widespread incorrect identification. How does such a thing happen? Even the 2012 exhibition “Hartnell to Amies Couture By Royal Appointment” at the Fashion and Textile Museum named the hat as a Fox design and included a replica of it, shown below, also attributed to Fox.

Exact replica of Queen Elizabeth’s June 7, 1977 hat without stitching detail as seen on the Jubilee hat.
Fabric and flower trim are leftovers from the original hat and the hat block was used to form both pieces.

This leaves a lot of questions. While we know Mirman made the Jubilee hat, where did the replica hat come from? Was Fox tasked later with fashioning the leftover bits from the famous hat into a museum display piece? Did Mirman make the replica hat? If so, why didn’t she include one of her labels in the replica hat? And why is Fox indirectly quoted in the articles above acknowledging that this hat was his most famous work?  With both Simone Mirman and Frederick Fox having passed away, these questions will likely remain unanswered.

What does remain, however, is our ability to correctly name Simone Mirman as the designer of this Silver Jubilee hat. My thanks to the Royal Collection Trust for their quick and efficient help. Their first two instalments of “Fashioning a Reign: 90 Years of Style from The Queen’s Wardrobe” at Holyrood House and Buckingham Palace have been exceptionally informative. I can’t wait for the third part of the exhibition to open later this fall at Windsor Castle.