King Philippe and Queen Mathilde embarked on a state visit to Japan earlier this week. They were officially welcomed at the Imperial Palace in Tokyo on Tuesday where, as expected, the occasion saw a number of new hats.

Embed from Getty Images
Queen Mathilde stood out in a new brown wool casque style headpiece covered in red-orange and brown maple leaves. There’s no doubt this is a unique and daring design that requires considerable millinery bravery to carry off but I wonder if it’s a little TOO far out there to be considered attractive. I’m just not sure a leaf covered helmet, no matter how creative or beautifully executed, can be flattering. 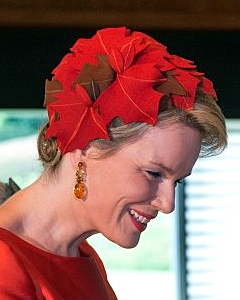 Empress Michiko topped a charcoal suit with a small matching saucer hat. While this follows the same shape and scale of many of Michiko’s other hats, it is set apart with a double underbrim in silver lattice straw and a simple ribbon twist trim in a lighter shade of grey.

Crown Princess Masako topped her pale pink suit with a matching hat. While the shape of this design- with a domed, straight sided crown and primly upturned brim- is neither memorable nor flattering on Masako (from the front view, the hat looks too big for her), I think it may be partially redeemed with that lovely, pleated hat band.

Embed from Getty Images
Designer: unknown
Previously Worn: I believe this hat is new
These three hats cover completely different ends of the royal millinery style spectrum and while it doesn’t seem fair to compare them, I can’t wait to hear your thoughts on each design. Let’s chat!
Photos from Getty as indicated

24 thoughts on “Belgian Royals on State Visit To Japan”