The celebration mass in honor of King Carl Gustaf’s Ruby Jubilee yesterday was also attended by members of his extended family and two other European monarchs. Norway and Sweden have close ties so it was no surprise to see King Herald and Queen Sonja. Queen Sonja repeated a dove grey picture hat trimmed with a meandering curled ribbon around the brim. It would not be my first choice of colour for her to wear but I like the shape of the hat very much. This hat is at least 13 years old and has stood up quite well, don’t you think?

Queen Margrethe and Prince Henrik of Denmark are both fellow monarchs and extended family members  (Queen Margrethe and King Carl Gustaf are first cousins) and it was also no surprise to see them in Stockholm as well. Margrethe repeated a bright turquoise blue hard-shell beret style hat trimmed in twirling blue feathers. It’s a quirky hat that I like very much on Margrethe- she looks great in blue and the shape of this hat does not make her look bald, unlike many of her other hats. I also suspect this costume designing Queen likes a little bit of creative whimsy in her wardrobe and this whirlybird certainly delivers.

King Carl Gustaf’s four sisters were also in attendance but the only one in millinery was Princess Christina. And what a piece of millinery it was! Christina sported a black headpiece made of long, individual petals…. or propeller blades? Whatever it was, I was not a fan. 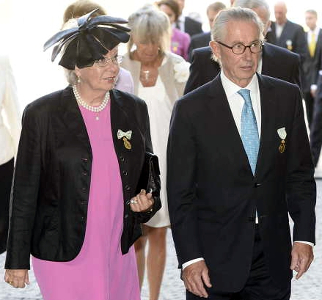 Princess Christina’s daughter-in-laws were the only other extended family members in hats and both sported a pair of grey fascinators. Emma Magnuson, wife of Christina’s son Oscar, wore a demure grey bow trimmed with a fabric rose and feathers. As far as fascinators go, this one was neither offensive nor particularly memorable. 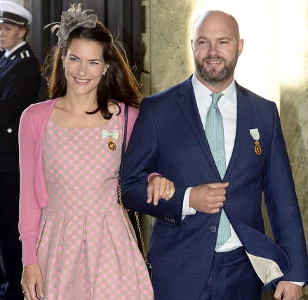 Vicky Andren, who recently married Christina’s son Gustaf, wore an explosion of pale grey feathers. It’s a very fun headpiece but one I didn’t think fit particularly well with her elegant navy dress and jacket. I suppose, however, as the newest member in the extended Swedish royal family, it’s a good starting point. It is more of a millinery statement than Crown Princess Victoria made so we’ll give her points for that! 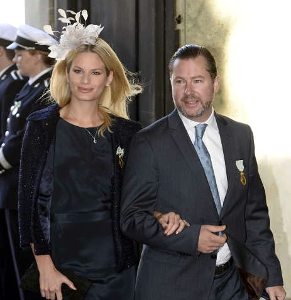 The Ruby Jubilee was a much lower key event than Queen Margrethe’s Ruby Jubilee last year; I suppose the Danes are a glitzier bunch while the Swedes may have used up their annual quotient of glitter back in June for Princess Madeleine’s wedding. Nevertheless, there were also some lovely hats yesterday- which one was your favourite?

Photos from Getty as indicated; Sven Lindwall via Expressen; and Dutch Photo Press