This wedding was attended by a number of “minor” royals from across Europe. Princess Maria-Laura of Belgium, who is also Archduchess of Austria-Este through her paternal side, wore a brimless bright pink hat with swarthy net veil. 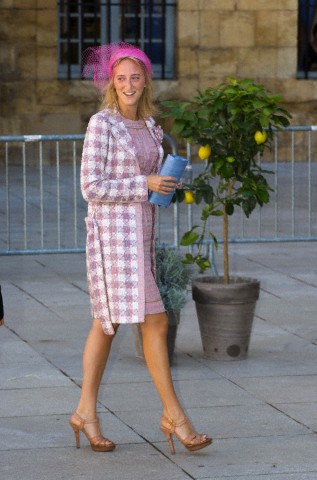 Lord and Lady Nicholas Windsor, seen here behind Archduke Imre and Archduchess Kathleen of Austria, were the only members of the British royal family in attendance (although their attendance was not in an official capacity but a personal one). Lady Nicholas wore a new hat that is difficult to see here but that appears to be a brimless sphere in cream straw. I think it’s a great shape for Paola although I will wait for a better view to weigh in further.

Fürstin Gabriela zu Sayn-Wittgenstein-Sayn wore a very beautiful beige picture hat with a diagonal band that wrapped around the crown down to the brim, edged in black. I think the hat would be improved with the removal of the red carnation flower but it is still a beautifully shaped hat. (On a side note, I get a kick out of Gabriela’s husband Fürst Alexander stealing some happy iphone snaps in the second shot!) 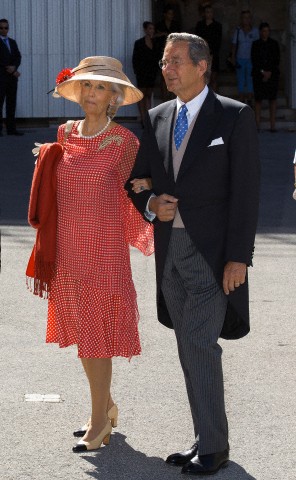 Archduchess Alexandra of Austria topped her cream suit (I love the pleated ruffles around the cuffs and collar) with a classic black cartwheel-brimmed hat. The oversize bow on the hat was not to my taste and made the hat look rather dated.

Archduchess Hélène of Austria wore a very small grey ribon fascinator. I was disappointed in this headpiece; Hélène’s beautiful sharply graphic suit could have carried a much more dramatic hat and I thought this crumpled bit of ribbon did not measure up. Hélène’s daughter Archduchess Priscilla of Austria wore the same cream hat she wore to Archduke Imre and Archduchess Kathleen’s wedding last year. This hat is fascinating to me because underneath the mass of wide ribbon trim this hat is a simple straw bowler. I think the ribbon trim makes the shape work very well and it is very flattering on  Priscilla’s oval-shaped face.

While not officially a royal, Donna Beatrice Borromeo attended with her longtime partner, Pierre Casiraghi. Beatrice wore a dramatic headpiece of two black feathers that wrapped around her head in a wide spiral. I’m not sure I like the way the headpiece attached to the side of her head but the overall effect of this hat was unique and startlingly beautiful.

Archduchess Anna-Gabriele of Austria wore one of my favourite hats of the day, a wide brimmed taupe straw picture hat with a short crown. It’s such a fun hat that I thought looked lovely with Anna-Gabriele’s short hairstyle.

I think the most showstopping hat of the day was worn by Princess Isabelle of Liechtenstein. Her choice, a gigantic purple mushroom shaped picture hat trimmed in white edging and voluminous tulle veil, was dramatic to say the least. The hat was a little over-the-top for my taste and I am still perplexed by the outfit she chose to pair it with. Picture hats and turtlenecks just don’t work well together… ever.

I think this showstopper is a great hat to end my hat coverage of Claire and Felix’s wedding. I’m sure you join me in wishing this lovely young couple a lifetime of love and happiness.

Photos from Getty as indicated; Albert Nieboer and Crystal / Slash News via Corbis