Reader Arianna submitted a question I suspect many readers are wondering about: And now you must allow me a silly question, but I’m always wondering about it: how do these hats stay on? Especially the ones placed at an angle… Is there a comb inside? I think I’m not the only one among your followers who asks herself this question!

This is a great question (and for the record, not all royal hats stay on royal heads!). For an answer, I turned to talented American millinery designer, Jill Courtemanche. Her perspective, from the ‘inside out’, is most insightful. Here is what she had to say:

“With the younger generation of royals taking center stage in the last few years, the classic cocktail hat has been reinvented and rebranded as the fascinator. These often whimsical fancies come in all shapes and sizes and give the impression that they are defying gravity; suspended in mid-air atop a well coiffed lady.

In my shop in southern California I have a wall of these little perchers and it is always the first stop for clients looking to play dress up, and they always ask the same question, “I love fascinators but how do I keep them on my head?”. There are as many answers to this question as there are heads, as everyone has a different sense of how a hat feels comfortable and every milliner has their own special trick on how to make it fit just right. Here are a few of the more commonly used options:

My personal favorite, as I find it to be the most comfortable for all day wear, is an elastic. Preferably the elastic should be the same color as the wearer’s hair and is worn under the hair at the back, resting below the bump on the back of the head. You can see an example of this here on Princess Marie of Denmark.”

“Probably the most common way to attach a fascinator is with a headband. One of the advantages for the designer of using a headband is one can be sure the hat is perched just so. A headband can only be worn one way ensuring perfect positioning every time. The milliner can choose to make the headband very narrow so that it blends in with the wearers hair as seen here on Zara Phillips or incorporate the headband into the design itself for a more seamless look, as seen here on the Countess of Wessex.” 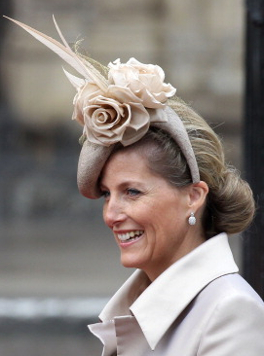 Zara Phillips, Dec. 25, 2012 in a Karen Henriksen design
The Countess of Wessex in a Jane Taylor percher for the royal wedding, April 29, 2011

“One of the more classic ways of keeping on a hat which is traditionally worn further back on the head, such as a pillbox style, is with combs. Seen here on Princess Diana and Princess Beatrice, there is usually a wider comb at the front of the hat, acting as a true anchor and then floater combs or loops for hair pins on each side of the hat for added security.”

Princess Beatrice in Stephen Jones for the Diamond Jubilee, June 5, 2012;
Princess Diana in John Boyd while on tour of Australia in April 1983

“Of course, we can’t talk about any of this without touching on the most classic method of all for keeping ones hat in perfect position, the ever traditional hat pin. This method has been used for centuries and it is fool-proof although less than gentle on the hat! Hat pins are generally 8″ to 10″ in length and go first through the hat, then through the ladies hair and back out through the hat and can be elaborate with jewels or feathers, tone on tone like the ones seen here on Queen Elizabeth or simple with a pearl tip as seen here on Queen Máxima.”

Queen Elizabeth in a Philip Somerville design worn at a Buckingham Palace Garden Party, May 14, 2002

“Of course there are many other methods used but these are the most popular and in my opinion the most comfortable. Feeling secure in your hat is the most important thing, it should look and feel effortless!”

Thank you so much, Jill, for sharing your hat knowledge with us. I now find myself looking at hats analyzing if there is a comb, elastic, a hidden headband or a hat pin! For those of you unfamiliar with Jill’s marvelous hat design work, do check out her website here.