King Willem Alexander and Queen Máxima’s inaugural tour of the Caribbean moved on to the island of St. Eustatius today.  Máxima repeated her vivid orange folded straw headpiece and matching cotton day dress for today’s visit. I will post better photos as they are released throughout the day but at first look, I like the hat (she looks to be wearing it to the side instead of on the top of her head as she did last time) but wish she would have chosen smaller earrings.

There was some debate here in the comments yesterday about the appropriateness of Máxima’s fashion choices so far on this tour- I’m interested to hear your responses about her ensemble today. Let’s just keep things a little lighter than yesterday, please! 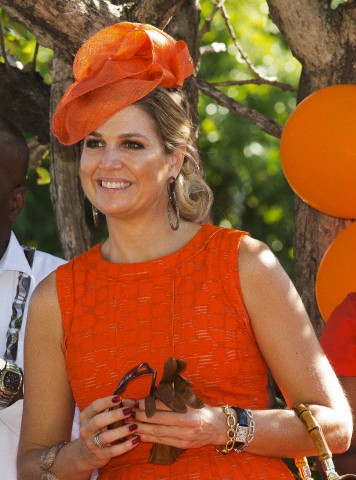