The Monegasque Royal Family celebrated Monaco’s national holiday today with a traditional mass in the Cathedral of Monaco and balcony appearance at the palace.

Princess Charlene wore a new navy wool picture hat with wide brim. It was nice… but I thought it fell a little flat. I think some sort of large feather sweeping across the hat would have added the “little something” her outfit needed and lifted the austerity of the overall look.

Princess Caroline wore a large black Garbo-style picture hat with slightly floppy brim. While this hat was also quite simple in design, the height of the crown, the shape of the brim and the ribbon around the crown created more visual interest than Charlene’s hat did. Granted, an impeccably tailored Chanel suit will make any hat look amazing!

Princess Stephanie didn’t wear a hat… again. It seems her allergy to head wear is a chronic condition. She did, however, slick her hair back in a severe ponytail which was anchored by a scrunchie. To her credit, the scrunchie matched her coat… but it was a SCRUNCHIE and such things should simply not be seen in public on royal heads.

Charlotte Casiraghi did not attend this event (rumours are that her baby is due soon) and Princess Alexandra does not appear to have quite reached hat wearing age. Hopefully, we will see these two younger members of the family in fantastic hats at this event next year.UPDATE: video of this event caught a glimpse of Tatiana Santo Domingo. She looks to be wearing a simple black cloche hat trimmed with a wide ribbon.

Yesterday, this family unveiled a statue of their father, Prince Rainier, in the palace gardens. For this more somber event, Princess Caroline wore a small black cloche hat. 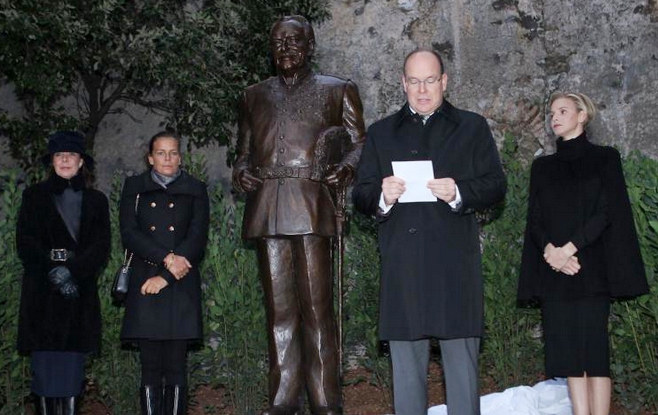 Photos from Getty as indicated and AFP