The Norwegian royal family welcomed the Indian President on the first state visit between the two countries today. Crown Prince Haakon met President Pranab Mukherjee and his daughter Sharmistha at the airport and accompanied them to the Palace Square, where they were received by the King, the Queen and Crown Princess Mette-Marit. Queen Sonja wore a navy blue pillbox hat in what looks to be crushed silk velvet (her tailored suit jacket was in the same fabric). The colour looked beautiful on Sonja and I really liked the placement and scale of the pillbox with her hairstyle. We have not seen this Queen in a pillbox hat in a long while and I thought it was wonderful on her today.

Designer: unknown
Previously Worn: I think this hat is new

Crown Princess Mette-Marit repeated her flat pale pink pillbox hat, worn nearly vertically on the back of her head. I love the side view of this hat but find the front view rather frustrating as it looks like she is not wearing a hat at all.

Princess Astrid repeated her orange curled fascinator. It’s a rather quirky headpiece and the unexpected nature of it makes me almost like it. Maybe. 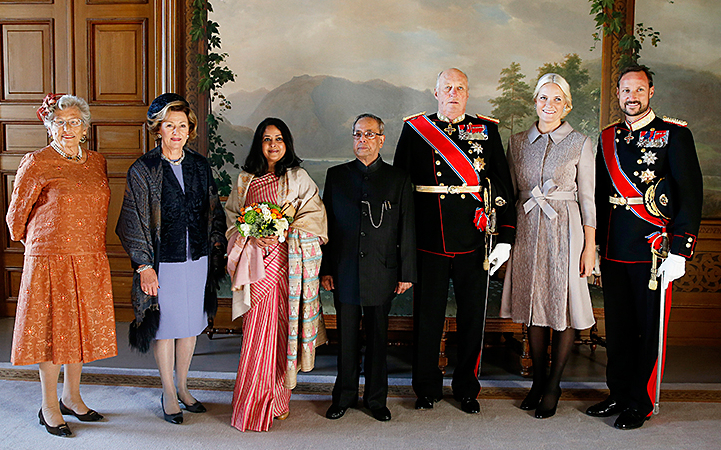 A brief video of the above photo is available here. My favourite hat today was the pillbox worn by Queen Sonja- did any hats stand out to you?