Emperor Akihito celebrated his 81st birthday yesterday and was joined on the balcony of the Imperial Palace by his immediate family. Dressed in pale green and blush pink pillboxes, Princess Kiko and Princess Mako’s  hats were made as the same fabric as their gowns. While it creates an extremely polished ensemble, it seems a little too much of a good thing. Empress Michiko did not wear a hat for this event but looked lovely in a pale pink silk dress.

Designers: unknown
Previously Worn: I believe both hats are new

Crown Princess Masako wore a hat that is new to us here on the blog but one she has worn to this same event four times previously. This hat, a navy blue velvet bumper hat, is trimmed on the side with the same black beaded embroidery as is on the collar and cuffs of her jacket. I thought the deep colour and luxurious velvet worked better for an all-over matching look. Even so, I am longing for the day when one of the Imperial royal ladies tops one of their demure suits with a brightly coloured, contrasting hat. 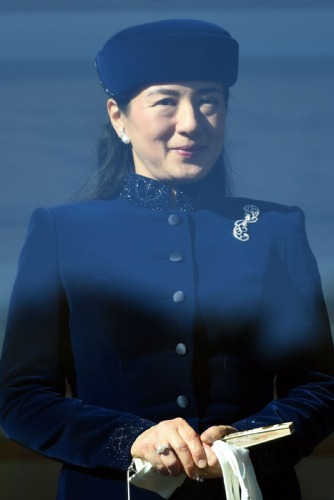