The remaining working members of the Danish Royal Family also were on hand today to welcome King Willem Alexander and Queen Máxima for their state visit. Crown Princess Mary wore one of our favourite hats last year, her oversize purple felt pillbox with feather trim. This event gave us a better view of this hat than we saw during its first outing at the opening of Danish Parliament last fall, leading me to ooh and aah over the the colour, detail and scale of this hat. It’s so very good.

Princess Marie followed Princess Mary’s fashion formula, topping her chic cream coat with a purple fedora (and matching purse!). While I wish better photos were available, it looks like this new hat for Marie is a keeper. She wears fedoras exceptionally well and purple is a great colour for her. 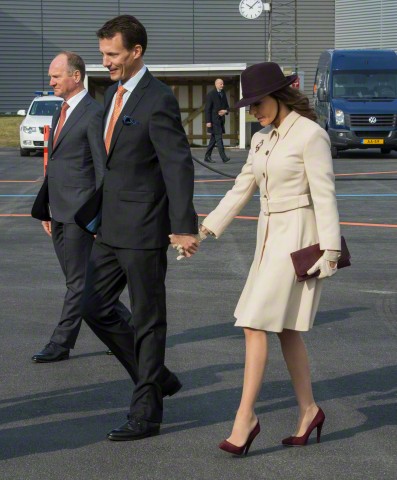 Princess Benedikte repeated her ecru felt hat with contrasting swirl and raised brim at the back of the hat. It is a hat we have seen numerous times on Benedikte but one that looks great on her. With her oyster tweed suit and fur trimmed wrap, I thought Princess Benedikte looked stylish and elegant.

Many royal watchers were expecting the Danish royals to bring their fashion ‘A game’ for this state visit and when it came to hats, they certainly did not disappoint. Which was your favourite royal hat in Copenhagen today?

Photos from Getty as indicated; Splash News and Patrick van Katwijk via Corbis