On Tuesday, King Phillipe and Queen Mathilde were received by Chinese President Xi Jinping and his wife Peng Liyuan at a welcome ceremony outside the Great Hall of the People in Beijing. Queen Mathilde unveiled her second new grey hat on this tour, a round felt saucer percher style trimmed with two black feather quills. This is a new hat shape for Mathilde and the proportion was just right for her. The simplicity of the hat was  a perfect contrast to Mathilde’s printed dress and made for an ensemble which was stylishly modern but very pretty.

Designer: Fabienne Delvigne. It is the “Yù&me” design. Dress by NATAN
Previously Worn: This is a new hat

Yesterday, the fifth day of the royal tour, Queen Mathilde joined Peng Liyuan for visits to an academy of art and experimental school for deaf students followed by a dinner with leading Chinese women hosted by fellow countryman Juan Van Wassenhove, founder of the Temple Hotel Founder. For these events, Queen Mathilde repeated her pale grey silk covered calot hat trimmed with a wide grey straw twisted ribbon tail. The pairing of this printed hat with Mathilde’s silk suit made for a demure but very elegant outfit. 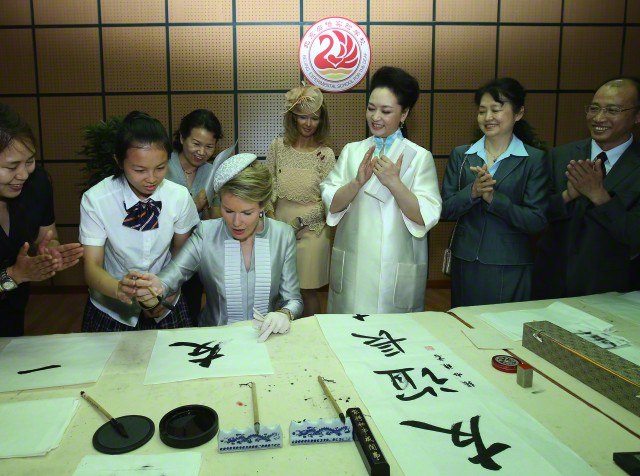 After three grey hats in a row on this tour, Queen Mathilde surprised today with the most beautiful red ensemble. 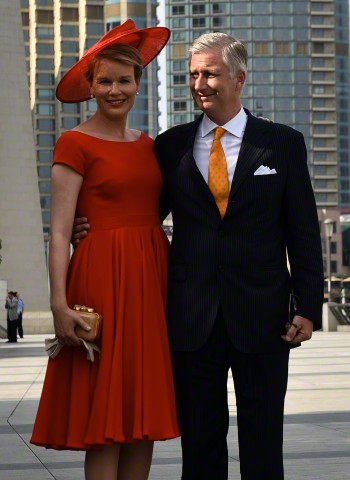 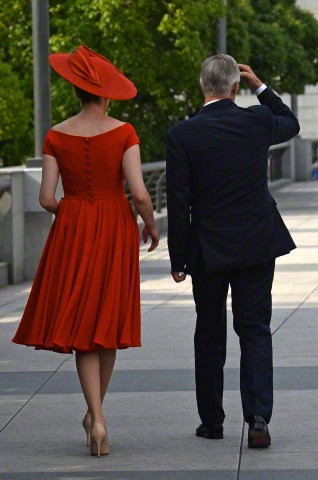 A nod to the host nation’s flag, this large red straw saucer hat is simply trimmed with large, stylised abacca leaf that curves around one side of the brim. While lovely on its own, its pairing with Mathilde’s red dress is exquisite.

Designer: Fabienne Delvigne. It is the “Chinatown” design. Dress by Bernard Depoorter.
Previously Worn: This is a new hat

With the exception of her first ensemble, I think Queen Mathilde has looked fabulous on this tour. What do you think of the three hats she has worn this week?