Members of Imperial Family joined the Emperor and Empress at the Imperial Palace yesterday for the Ceremony of the Utakai Hajime, the annual New Year’s Poetry Reading.

As she hosted the event in her home, Empress Michiko did not wear a hat. Princess Kiko repeated a cream silk covered bumper hat that looks to be trimmed in the same braided detail adorning the bodice seams of her gown. While impeccable, the demure ensemble is a little boring. Princess Mako was slightly more adventurous in a new pale blue calot hat with curved brim that rolled back closely around the hat’s crown. The hat is covered in the same silk as her floral gown and trimmed with two silk blooms at the side. It’s not an exciting hat but the shape looks great on Mako and works particularly well with her fringe. 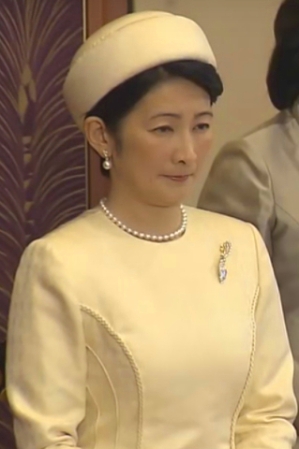 Princess Hanako of Hitachi stood out in a new vibrant blue gown in a coordinating hat. The hat’s domed crown was covered in plain silk while its small brim was wrapped in the same leopard printed blue silk as Hanako’s gown. It looks like the hat was completed with feather trim at the back. While the ensemble has a slight 1980s air about it, the bold colour and slightly racy pattern is such a departure from most things we see on the Imperial royals that I’m inclined to love it anyway.

Princess Nobuko topped her pale grey gown with a calot hat trimmed in a huge blossom on the side while her daughter, Princess Akiko, chose a simple calot in the same bubblegum pink as her silk gown. Princess Hisako of Hitachi wowed in a teal suit with lavishly embroidered sleeves and skirt. Her new pillbox hat looked to contain similar embroidery around the perimeter, making for a rather spectacular ensemble. Her daughter, Princess Ayako, topped her pale yellow silk jacquard suit with a matching new calot hat. While I’m all for a calot, the bows on either side of this piece lend a Princess Leia vibe (a vibe that is particularly ironic for a hat worn by a young Imperial princess!) 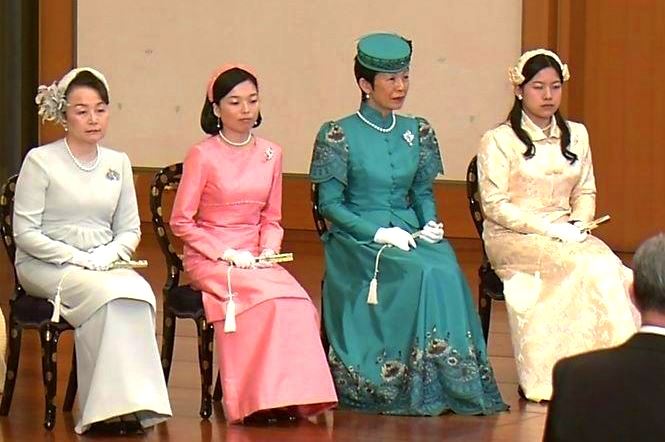 I always enjoy seeing court dress and thought Princess Hanako and Princess Hisako knocked it out of the park at this event. What did you think of the Japanese royal hats at this poetry reading?