There are a number of hats worn this month by members of the Imperial Royal Family that we must catch up on:

April 2: The Imperial couple visited Nara to take part a memorial service commemorating the 2600th anniversary of the death of Emperor Jimmu (the first emperor of Japan). On the first day of their visit, which took them to the Archaeological Institute of Kashihara, Empress Michiko wore a new ensemble in a cool slate blue. Her saucer hat, a larger scale than we often see on her, was simply trimmed with silk flowers and leaves. It’s a great piece on her that worked well with her suit (love the lattice smocking detail!). 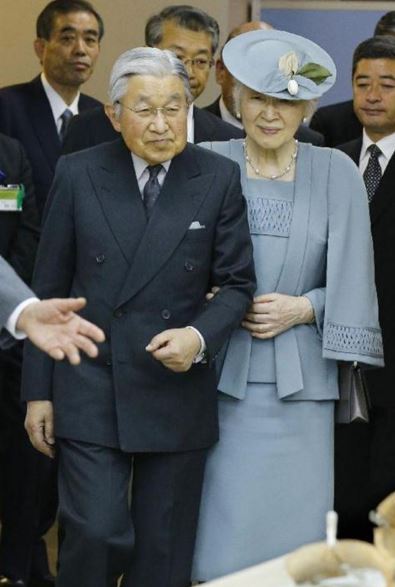 For their visit to the Kashihara Jingu Shrine later that day, Empress Michiko changed into a white suit topped with a white silk covered disk hat. We have seen this piece before on her- I like the wide, swathy white silk bow trim (Michiko’s hat trims are usually smaller) and the touch of grey silk on the bow ties the hat beautifully to her jacket.

April 4: On the final day of their visit to Nara Prefecture, the Imperial couple visited Takamatsuzuka Tomb and museum in Asuka Village. Empress Michiko repeated her dove grey rimmed saucer hat with folded bow trim for this engagement.

April 12: Emperor Akihito and Empress Michiko  visited the Mausoleums of Emperor Showa and Empress Kojun. For this, she wore a new hat in slate blue-grey. The saucer design featured a short rim around the perimeter (it looks like the outside of the hat is white) and a stacked, folded bow encircling one side of the piece. Changes in the Empress’ millinery are subtle at the best of times but this is certainly a departure from the go-to shapes we usually see her wear.

April 20: And finally, Princess Kiko of Akishino, who is president of the President of the Imperial Gift Foundation Boshi-Aiiku-Kai, attended the foundation’s 48th National Convention in Tokyo. Made of the same monochrome striped silk as her ice blue suit, Kiko’s bumper hat was trimmed with what looks to be a small bunch of silk flowers on the side. What stands out to me here is how the brim has been covered on the fabric’s bias, creating a diagonal stripe. It’s another very subtle but rather lovely touch. 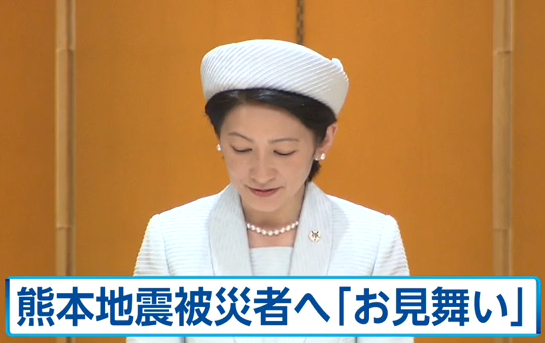 These aren’t the most exciting hats (and believe me, the sea of grey pieces in the Empress’ wardrobe is getting harder and harder to tell apart) but there are some design details, particularly on the first hat and last two hats, that are really lovely. Any thoughts on this bunch of very neutral Imperial hats?

11 thoughts on “Catching Up With The Imperial Royals”