Emperor Akihito and Empress Michiko travelled to Nagano this weekend to attend the 67th National Tree-Planting Festival. for their train journey and arrival on Saturday, Empress Michiko repeated her teal blue saucer hat trimmed with black and white silk bow (it’s not visible in these photos but the bow coordinates with a black and white skirt the Empress usually pairs with this ensemble). It’s always nice to see Michiko in some saturated colour.

For the festival’s main events on Sunday, the Empress repeated her white and grey double-layer disk hat with white bow and silk flower trim. The grey underbrim on this piece provided a very subtle contrast to Michiko’s pale blue-grey suit- a minor detail but an interesting one on someone whose ensembles are usually perfectly matched. Michiko has mixed and matched this hat with more several different suits (something we seldom see her do) and since any fashion experimentation on the Imperial royals is a good thing, I’m all for it. 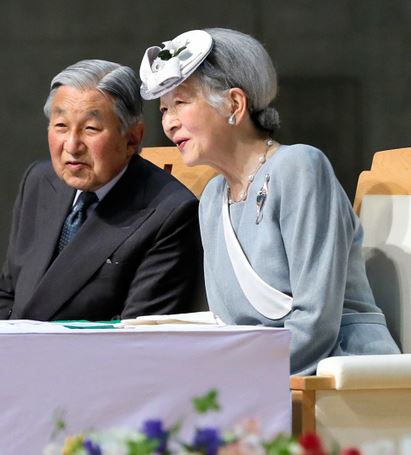 Your thoughts on these two hats worn by the Empress in Nagano this weekend?