Members of the Swedish Royal Family gathered in Stockholm yesterday for the opening of parliament dressed in the  traditional black and white dress code associated with this event. Queen Silvia led her family in a repeated white ruched straw headpiece with wide bow at the back. The lovely movement of this piece, which swirls around Silvia’s head, almost makes up for it’s open crown. I have long disliked such open crowned hats but paired with an impeccably cut black suit and pearls, this one almost works.

The three Princesses sported chignon hairstyles, each topped with a fascinator style headpiece. There has been growing controversy here at Royal Hats over the merits of this style of millinery and, like them or love them, I think each worked particularly well with this hairstyle.

This is the third outing for Crown Princess Victoria’s layered headpiece of black and white butterflies and while still not my favourite for her, I think it worked better with her Paule Ka dress than it has with any previous ensemble.

Princess Madeleine’s black free form shaped headpiece was worn as a calot the last time we saw it. I think the scale of this piece suits the placement we saw here and the combination of hard edged headpiece with the very delicate lace collar of her blouse made for an interesting contrast.

For my favourite ensemble of the day, Princess Sofia topped a streamlined Max Mara black dress with an over-size white camellia bloom headpiece. Black and white ensembles can be tough to balance but the scale of this headpiece works so beautifully with the dress, understated jewellery and a large chignon. The resulting combination is timeless, classic and so very chic. 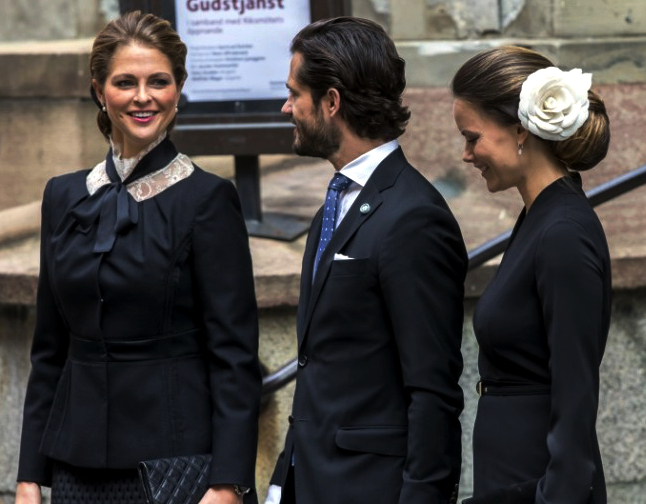 Designer: unknown
Previously Worn: this headpiece is new
Any thoughts to share on the quartet of Swedish royal headpieces for this year’s opening of parliament?
Photos from Getty as indicated;  Anna Karin Nilsson and Olle Sporrong via Stella Pictures; and Dana Press

20 thoughts on “Opening of Swedish Parliament”