Some of you have been patiently waiting for photos of Queen Elizabeth and her family members venturing out to church in Scotland this summer. Finally, there are some to share!

Backing up to September 4, the Queen was spotted en route to Sunday Service with the Duke of Edinburgh in a new chapeau. This looks to be a design in white straw with a domed, straight sided crown and gently raised brim on one side. Embellished with a white net veil with purple spots, two purple feather quills and a multi-looped purple straw bow, the hat is clearly designed to coordinate with the Queen’s purple coat and dotted dress. We’ll have to wait for a better view to offer a final verdict on this hat but the ensemble looks promising. 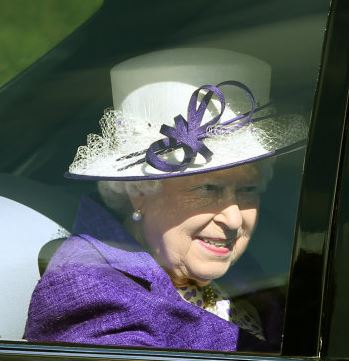 On September 11, Queen Elizabeth and the Duke of Edinburgh were accompanied to church by the Prince of Wales, the Duchess of Rothesay (Camilla’s Scottish title), the Earl and Countess of Strathearn (William and Kate’s Scottish titles), the and members of the Middleton family (see photos of everyone here).  The Queen repeated this silk embroidered wool hat with diagonal crown and wired sequin flower trim by Angela Kelly while Camilla repeated her Philip Treacy feather trimmed red beret. Kate was the only member of the party in a new hat that, unfortunately, was obscured in the car as she drove past. In burgundy wool, we’ll have to wait for this piece’s next outing to see it completely.

This weekend saw the Queen head off to church in a hat we have not seen on her in over a decade  In cream straw, this hat features a stovepipe crown and short brim and is trimmed with a wide twisted hatband in caramel straw and curling feather quills.

The Queen and Duke of Edinburgh were joined again by the Prince of Wales and Duchess of Rothesay. Camilla looked to be wearing a twin to the red beret with double feathers she wore the week before, this one in grey. It’s hard to tell with this view but this I think this hat has great potential to look wonderfully chic on her

11 thoughts on “Catching Up With the British Royals in Scotland”