Empress Michiko wore a quintet of saucer hats during a visit to Kyoto last Sunday through Wednesday (Imperial Family of Japan blog). The first, second and fourth hats all appear to be new designs. I love the lattice under brim on #1, the sharpness of the black and gold contrast of #2 and the softly romantic cream flower trim on #4. 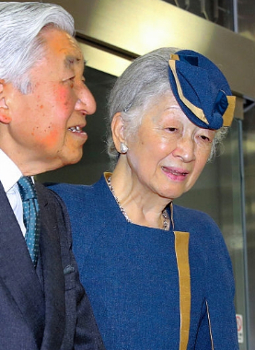 Prince Takahito of Mikasa, the uncle of Emperor Akihito, passed away on Thursday at the age of 100. Members of the Imperial royal family visited his home later that day as well as for the first of several burial rituals on Friday (Imperial Family of Japan blog). You can read more about the late Prince and his interesting life at these articles from the Japan Times, Asahi Shimbun, Japan News, and The New York Times. His funeral is scheduled for Thursday next week.

Carina Axelsson shared this snap of an afternoon out choosing this year’s Christmas tree. She wears her chocolate wool fedora very well.

Such a lovely photo shared by Queen Rania this week

And finally… British royal photographer extraordinaire Chris Jackson shared this snap of several vintage editions of Paris Match magazine. The resemblance between the subject and his very popular ginger grandson is remarkable.

Just spotted this handsome chap on the front of an ancient copy of @parismatch_magazine in deepest, darkest France – who do you think it is?!

2 thoughts on “This Week’s Extras”