King Willem Alexander and Queen Máxima continued their tour of Australia today in Canberra where they visited the Australian War Memorial, the Afghan Memorial, and met with Prime Minister Malcom Turnbull and Mrs. Turunbull Parliament House. For this calendar of more formal events, Queen Máxima surprised in orange from head to toe. Her wrapped straw calot, first worn on a trip to Curacao in 2011, features a straw double half bow and feather quill. On its own, the hat is a whimsical and rather fun accessory but paired with this coral lace dress (with incredibly awkward pink lining) and all orange accessories, the ensemble is catapulted way over the top into “Apricot Pumpkin Spice Barbie” territory. 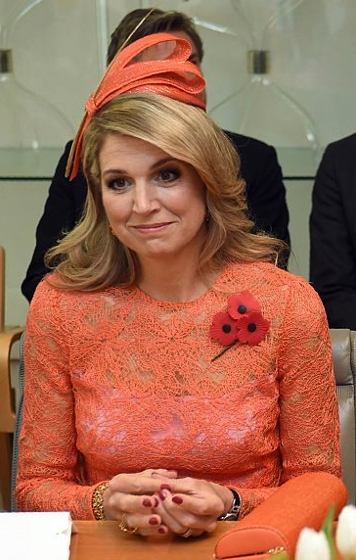 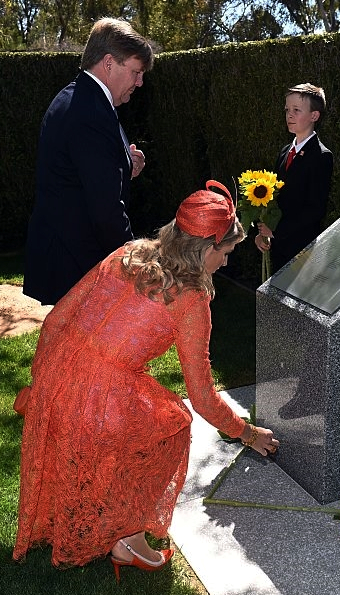 Designer: Fabienne Delvigne
Previously Worn: November 2, 2011
Many of us royal hat fans adore Queen Máxima’s bold and brave style and I suppose it’s inevitable with one as fashionably daring as she, that misses will occur. The ensemble was a complete miss for me, particualrly at today’s calendar of memorial visits but I would love to see this hat again (imagine it instead with a charcoal grey dress- so lovely!). What do you think of this hat and ensemble in Australia today?
Photos from Getty as indicated; AFP, AFP, AFP and AFP via Getty

28 thoughts on “Day 3 of Dutch Visit to Australia”