I’m so pleased to welcome Sandra to Royal Hats today! When I issued an open invitation for readers to write posts with suggestions of hats for various royals to repeat, Sandra proposed a slightly different take that places her in a role we’d all love to have for a day- millinery stylist for Queen Máxima. Welcome, Sandra!

The first Royal I saw in person was Queen Elizabeth the Queen Mother when she toured New Zealand in April 1966 – my grandmother had taken me with her to Napier to stay with her brother and sister-in-law during the school holidays. Not only did we stand and  wave as the Queen Mother went past standing in an open car but we also saw Britannia in port. My young mind (8 years old) was so impressed I still remember  the colourful bunting on Britannia and the ‘strings of pearls’ on the Queen Mother’s hat. Sadly, I’m blowed if I can find an image on the wonderful web of my first Royal Hat – blue and, as I say, covered in pearls – although I vividly recall that outfit being on a magazine cover.

Sorry Sandra- I’ve searched high and low and can’t find a photo, either! Maybe Jimbo or Baxter can work their magic?!

As a child I ‘watched’ on my  Viewmaster numerous times the weddings of Princesses Margaret and Alexandra, and Elizabeth’s coronation, and in real life have seen Queen Elizabeth (again, as a schoolgirl), Princess Anne in a tea-coloured dress up close and quite by accident on the South Bank in London in the early 1980s (no hat and no crowds either, I think it was an exhibition of artworks by prisoners), been in the same London theatre as the Duchess of Gloucester (tiara), and in 1986 had Diana and Charles wave to me (and some random roadside Brownies) in Doha, Qatar. Their limo was going so fast they had to wave to us from the back window – they both appeared to be smiling wryly. (As an aside, we had just arrived in London on our ‘Big OE’ when their wedding took place. We watched it on a small TV in my sister-in-law’s council flat in Woolwich.)

The pinnacle of my Royal spotting, though, is the moment when I was walking across a bridge in Stockholm, idly looking at the stalled traffic and there, looking right back at me looking at her, was Queen Silvia, very elegant in the back of a limo. In my memory she gave me a small smile but I may have edited that in!

Since I’ve started reading this magnificent blog, I’ve wondered why Queen Maxima doesn’t support Dutch milliners the same way she supports, for instance, Dutch jewellery makers. Her hats are overwhelmingly, if not exclusively, by the Belgian milliner, Fabienne Delvigne.

When I mentioned this to Hat Queen, her vast knowledge came to the fore as she pointed out that Maxima has worn designs by Berry Rutjes, Eudia, Herma de Jong, Hoedenhius Kaptein and hats by Jan Taminiau. “So, there are a few Dutch designers but not many … Many European royals don’t seem to be as tied to designers and milliners from their own country as the British are, although I think they are missing an opportunity to promote fashion in their country.”

I couldn’t agree more. It would be nice to see Maxima share a little more love round her own backyard. And by giving her patronage here and there in The Netherlands Maxima would also support the millinery industry and encourage Dutch artisans to train and upskill. In 2002 Marianna Jongkind was made a Knight of the Order of Orange Nassau for services to millinery so Dutch milliners are being recognised, just not worn very often by the Queen.

Some noodling round the ‘net has thrown up ten home-grown milliners that may suit Maxima. Almost all these designers also do avant-garde pieces and I’ve seen plenty of turbans and crownless hats so maybe it’s a Low Country thing? I’ve tried to include a few orange pieces because, you know, Orange!

1. Marcus Art and Fashion (Maria Marcus): Much here that would suit Maxima (and it seems, thanks to photoshop, she’s worn at least one Marcus hat) 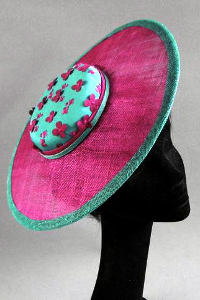 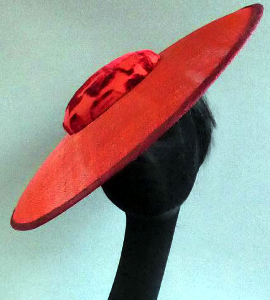 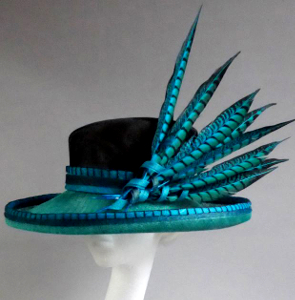 2. Irene van Vugt Accessories: Doesn’t seem to be a large collection but some nice designs, including this sinamay disc topped with flowers in a beautiful blue.

3. Marga van der Bos: I like the dusky pink wide teardrop brim (below), but some of designs may be a little too ‘Beatrix’ for Max. I wouldn’t want to see her (or anyone) in the ‘chef’ hat – even her vivacity wouldn’t fix that!

4. Berry Rutjes Jr.:  I can see Maxima in the teal Audrey Hepburn or Little Stitched Natural Cap, the Simple Beautiful (although in a colour to suit her tawny locks) and perhaps, if it were able to be worn at a more sensible angle, the Lulu Blue. 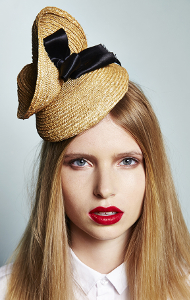 Thank you Sandra – what a diverse and striking set of hat suggestions! I imagine some will immediately strike a chord with other readers (let us know which ones do!). Stay tuned tomorrow, everyone, when Sandra will return with suggested designs for Queen Máxima from six more Dutch milliners.

25 thoughts on “Reader Guest Post: Stylist For A Day”