On Monday, Empress Michiko attended the 70th anniversary of the Japanese Nursing Association in Tokyo in a mushroom grey rimmed saucer with green and grey plaid origami bow. Also that day, she and the Emperor attended a ceremony to commemorate the 70th anniversary of the enforcement of Local Autonomy Act- her hat was a repeated white saucer with dark olive ombre bow and floral embellishment 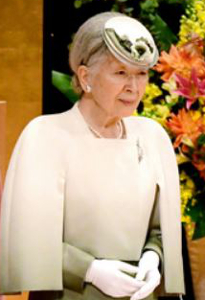 For the second day of her state visit to Ghana yesterday, Queen Margrethe repeated her white straw hat

Respected Norwegian royal reporter Kjell Arne Totland‏ reported this week that Crown Princess Mette-Marit has returned to work after treatment for Benign Postional Vertigo. This condition, which leaves one feeling like feeling like their head is spinning from the inside, could explain Mette-Marit’s millinery choices (or lack thereof) in recent years.

The new millinery designs that caught my eye this week included:

And from Jane Taylor, this purple velvet percher with dusty rose and purple ombre pleated crin ruffle. So luxe.

A thanksgiving scene from the lens of James Ogilvy. I hope all you American readers had a wonderful holiday!

Photos from  Asahi and  Asahi

2 thoughts on “This Week’s Extras”