Sweet red double hair bow for Princess Estelle on Thursday to receive the Swedish royal family’s Christmas trees along with her mum and brother (Swedish Royal Court). She also wore a glittery hairbow and feather boa to a pantomime theatre performance yesterday.

June is such a busy month here at Royal Hats, it’s no wonder we missed Princess Nobuko paying a visit to the JS Takanami. Her hat, a wide brimmed white straw design, has an unusually shaped brim and looks to be embellished with some sort of net tulle wrap and a bow at the back. It’s a unique shape for an Imperial royal hat. 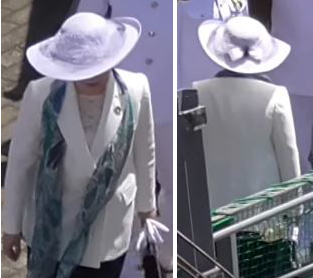 Kensington Palace confirmed that the Duke and Duchess of Cambridge, Prince Harry and Meghan Markle will attend church with the Queen and royal family on Christmas morning. For those of you waiting for Meghan’s first royal hat, I suspect that will be it. Also- mark your calendars for May 19 and hope for a daytime wedding. Daytime = HATS!!

New millinery designs shared this week that stand out to me include:

We’re just loving the floral vibes going on in the studio today ! The beautiful plum colour is accented perfectly by this blossom flower 💐 this hat is perfect for any occasion but would be stunning for a winter racing day 🐎 message me for colour options £175 . . . . . . . #flowers #millinery #hatdesigner #luxurybrand #stylists #bespokemillinery #fashion #ss18collection #newstyles #racing #fashionattheraces #racingstyle

A post shared by Laylaleigh Millinery (@laylaleighmillinery) on Dec 14, 2017 at 7:50am PST

New pictures released this week of Grand Duke Henri and Grand Duchess Maria Teresa, including a sweet snap of the Grand Duchess with her pups

Princess Martha Louise of Norway posted this Christmas wish, showing her great sense of humour (and a touching reminder that royals deal with many of the same life challenges as the rest of us)

A new portrait of His Royal Highness The Duke of Edinburgh, painted in the year of his retirement from public engagements, has been released today. pic.twitter.com/HX733sCarR

4 thoughts on “This Week’s Extras”