The Duchess of Cambridge celebrates her 36th birthday and in honor of this event, I thought we’d continue our inventory series with a peek at all of the different red designs in her millinery closet. Since beginning her royal life, Kate has worn four red hats- here they are in the order they were introduced:

UPDATE: Since this post was published, the Duchess has added the following red hats to her wardrobe: 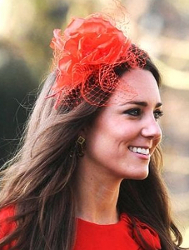 Some of you may also remember Kate wearing this red silk rose and net fascinator of unknown design in April 2010 to a friend’s wedding. The piece has not made a reappearance since the royal engagement and I strongly suspect it is no longer in Kate’s wardrobe.

That leaves the four designs above on which to focus our discussion. The first one, studded with maple leaves and worn in Canada on our national holiday (something that endeared the new Duchess to us Canadians!) fits such a small and specific niche that a repeat appearance doesn’t seem likely. The remaining three are an interesting trio- despite all being small in scale, they follow distinctly different shapes. I adore the jaunty movement and bold trim of #3 and I think Kate does to, since she ordered a twin of this hat in blue for her second visit to Canada in 2016. The delicate rosette and leaf trim on #4 is also a lovely elevation to this classic pillbox, a shape that can sometimes be a little boring.

Red is a great colour on Kate and while I understand why, at this point in her royal life she often eschews fashion that draws attention, it would be lovely to see her add a few more red designs into rotation.

What do you think of Kate’s red hats?