Last Friday, the Emperor and Empress hosted Utakai Hajime, which translates as ‘First Poetry Reading’, a gathering at the Imperial Royal Palace at the beginning of each new year where participants read traditional Japanese poetry on a common theme before a wider audience. Like the New Years Lectures, the dress code for this event is Court Dress, giving us another opportunity to see the Imperial royal ladies (except the hostess, Empress Michiko) in gowns with hats. 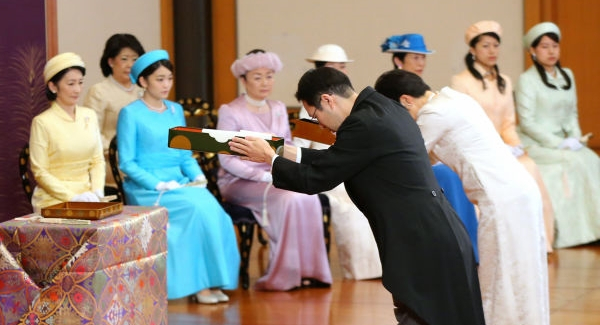 Princess Kiko repeated a pale yellow hat with double bumper brim in the same pale yellow silk as her gown. Princess Mako topped her turquoise gown with a matching bumper/pillbox trimmed with a bow at the back.

Princess Nobuko of Mikasa wore the most interesting design of the event, a open crowned headpiece of dusty pink tulle wrapped around a wide rim. Her daughter, Princess Akiko, wore a cream hat with pleated crown and short brim covered in the same silk jacquard as her gown. I believe both of these hats are new additions. 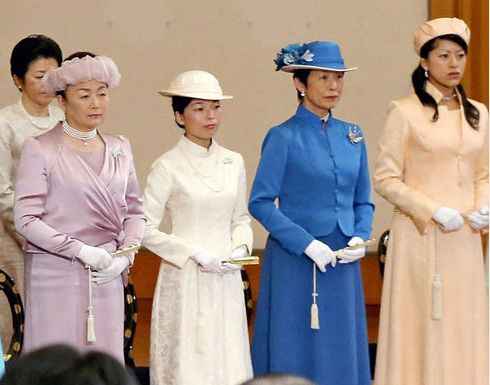 Princess Hisako of Takamado topped her high necked bright blue skirt and jacket with a matching hat with white brim, trimmed with a spray of blue and white flowers on the side. Princess Tsuguko wore a peach bumper hat trimmed with large abstract leaves in the same hue while Princess Ayako wore a brimless design in pale seafoam green silk to match her  gown. I believe these three hats are new as well. 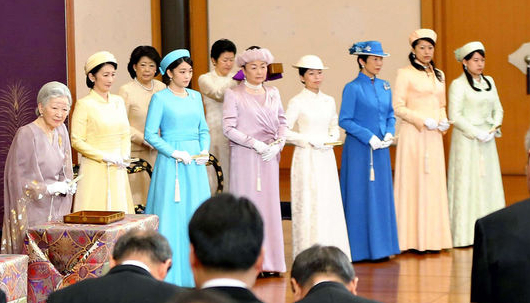 Photos of this event are scarce which is such a pity as there are numerous hats that would greatly benefit with closer views. Princess Hanako, who usually brings the most daring millinery designs to these New Years events, did not attend and was certainly missed. From what we can see here, what hats stand out to you most?
Photos from ntv.co.jp; The Asahi Shimbun, The Asahi Shimbun and The Asahi Shimbun via Getty as indicated