I’m so pleased to welcome Denmark-based Dutch freelance journalist Inger Stokkink back to Royal hats for the second part of her review on the exhibit on Queen Margrethe’s fashion at Den Gamle By Museum in Aarhus. If you missed the first part of her article, jump over to this post to catch up.

Queen Margrethe has been known to actively take part in the designing process with her designers, especially gala gowns, or ’big dresses’ as the Queen calls them. Festive gowns for royals have requirements and little tricks that do not play a role in the lives of lesser mortals. Orders, medals, and chains that are worn for ceremonial purposes, along with large pieces of jewelry need to be incorporated in the design. The inclusion of these items must happen not only visually but also in a practical and structural sense – they can be so heavy that they weigh down the textile, thereby ruining design, material, drape and silhouette.

These considerations do not play a substantial role in the design of royal hats, yet the Queen has plays an active role in the design process here, too. Tove Mathiassen points out a black calot hat, saying, ”We know for a fact that the Queen has been an active co-designer of both dresses and suits. And about one of the hats in the exhibition, the Queen has told that it first was worn at the occasion of the Crown Prince’s konfirmation in 1981 and later had added red flowers. ”

Black calot hat with red flowers, above right; in its original form, below, on May 28, 1981 at Prince Frederik’s confirmation with a black feather pouf on the side

The hats themselves – on their own, so to speak – do miss their bearer and her clothes to bring the designs to life. Illustrations or photographs of the Queen wearing them would have helped the exhibition here. On the other hand: how much closer can you get to so many royal hats?

Cream straw wide brimmed boater with inset crin stripe on the brim second from left above, and in action below, at Queen Margrethe and Prince Henrik’s silver wedding anniversary celebrations on June 10, 1992

Pale blue straw football shaped saucer variation with silk crepe binding, hatband and floral trim pictured in the exhibition at top left above, and in closeup with curator Tove Engelhardt Mathiassen, below 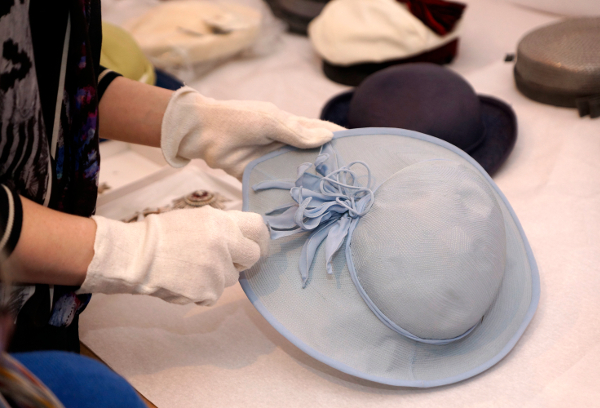 The hat in action (bottom left) on July 29, 1981 at the high profile wedding of Prince Charles and Lady Diana Spencer

Not only ’grown-up’ hats are on display. There is a special place for the type of hat that almost every Danish high school student shares with the Queen: the studenterhat worn during graduation festivities. The Queen has two: a Danish one, and one from the Faeroe Islands, with an extra tassle, and a beautifully monogrammed red-leather hatbox to go with them. 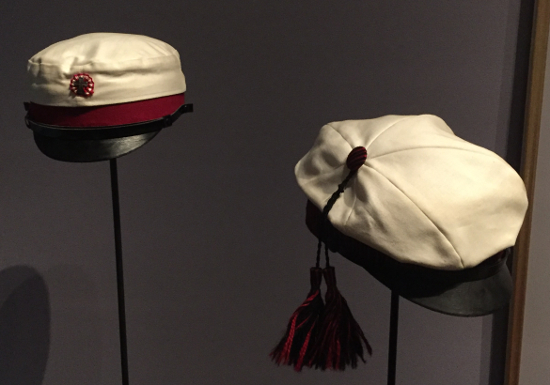 Should you wish to see these 42 hats for yourselves, visit Den Gamle By, the historical museum in the Danish town of Aarhus. The exhibition runs until September 9 this year and has two sections: gala dresses, and the dresses and suits she wore on her numerous visits around Denmark. The latter also includes some of her children’s clothes, a bicycle, and hats she made for performances of her friend’s Susanne Heering’s ballet school Fru H’s Danseinstitut.  If you have already seen the Queen’s dresses at the Frederiksborg exhibition in 2015, then you won’t find anything new – apart from the hats, of course.

If you read Danish, much about the Queen’s hats can be found in the book ’Dronningens Kjoler’ (The Queen’s Dresses) by Katia Johansen (2012, Gyldendal Publishers), pp. 100-105.

Inger- this has been such an insightful look at Queen Margrethe’s approach to fashion and millinery! The photos in this post alone show saucers, Bretons, unusual pillbox variations, wide brims, cloches and others that together, display a  wonderful diversity of scale, material and trim. Thank you for taking the time and effort to share this exhibition with all of us who are unable to attend. It really has been the most wonderful gift.

Photos from Miguel Mielgo and Inger Stokkink may not be replicated in any way without written permission.

Inger Stokkink is a Dutch freelance journalist living in Denmark. She divides her attention between politics, sailing and royalty – and hats.