We’re going to postpone our Tuesday series on Queen Elizabeth’s iconic hats until tomorrow to catch up on a number of new and repeated hats that appeared in Scotland Sunday morning for church. The queen led her family in a new turquoise felt hat and matching coat trimmed with a mass of copper feathers on the front of the hat. The feather trim is an unexpected colour clearly ties to the ensemble, thanks to the open collar on the coat which reveals a good look at the Queen’s copper and teal silk floral dress. The hat shape looks a bit clunky to me but I’m going to reserve full review until we have a better look. 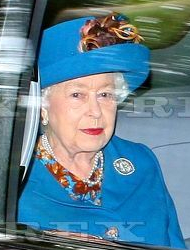 The Duchess of Cambridge repeated her modified navy felt saucer percher hat with raised back, trimmed in overlapping felt leaves. It’s a simple hat that pairs beautifully with her navy trimmed coat.
Designer: Lock and Co.
Previously Worn: February 7, 2016 and March 26, 2015 (private event)
Princess Anne repeated her purple felt fedora with wide brim and layered, slim hatband (with looped bow and feathers on the opposite side as this view). Autumn wore a beret based percher in black or navy that looks to be trimmed with a side bow. There aren’t any similar hats we’ve seen on Autumn before, leading me to suspect this is a new design. 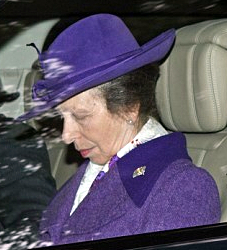 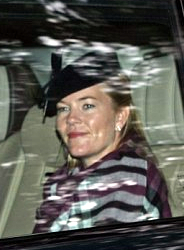 Designer of Princess Anne’s hat: Amy Morris-Adams
Previously Worn: March 16, 2018
Designer of Autumn’s hat: unknown
Previously Worn: I believe this hat is new
Interestingly, the Countess of Wessex and Lady Louise Windsor were both in attendance but neither were in hats (see this photo gallery of additional shots). So Sunday’s outing saw four hats- two of which appear to be new. Thoughts?
Photos from Peter Jolly/REX/Shutterstock and social media as indicated

17 thoughts on “Church Hats in Scotland”