Back on September 15, Princess Helene of Yugoslavia (granddaughter of Regent Prince Paul of Yugoslavia and King Umberto II of Italy) and  married Stanislas Fougeron in Villeprevost, France. In the final photo below, you’ll see Princess Lea of Belgium in the second row in a cream floral trouser ensemble with wide brimmed hat.

On 15 September, Princess Helene of Yugoslavia married Stanislas Fougeron in Villeprevost, France. This is her second marriage.
The Princess is a granddaughter of Princess Olga of Yugoslavia (born Princess of Greece and Denmark), the sister of Princess Marina, Duchess of Kent. pic.twitter.com/2K2Uj9J93l

The Prince of Wales in military hats on September 22 to present a new Guidon to The Queen’s own Yeomanry and this morning to present medals to members of The Royal Regiment of Scotland’s Black Watch 3rd Battalion.


HRH The Duke of Rothesay, the Royal Colonel of @3_SCOTS, was at #FortGeorge today to present the soldiers with #Iraq medals, after their recent training and mentoring mission on #OpSHADER The battalion returned in July and recently took part in homecoming parades. pic.twitter.com/N0NRaJJpgN

The Duchess of Cambridge atttended her friend Sophie Carter’s wedding last weekend in a cornflower blue silk flower and crin bandeau headpiece from Juliette Botterill. It’s such a pretty colour but the combination of this design with the matching dress and coat reads too twee for my liking. 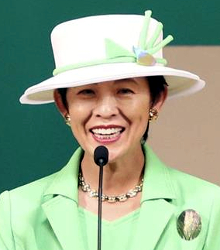 The following new millinery designs caught my eye this week:

Much has been written about the Duchess of Sussex’s first charity project in support of the Hubb Community Kitchen. Take time to read the cookbook’s forward (see it here)– clearly written in her own voice, it’s compelling and beautiful.

The Duchess of Sussex is supporting a new charity cookbook, 'Together: Our Community Cookbook', which celebrates the power of cooking to bring communities together. #CookTogether pic.twitter.com/XEclxgQjR4

Mike and Zara Tindall joined the first leg of the Blue Marine Foundation fundraiser cycle ride from London to Monaco last week (they joined in from London to Dover).

Zara and Mike Tindall joined over a hundred other ocean conservationists at dawn yesterday to launch the 2018 @london2monaco cycle ride. Money raised from this year’s ride will go towards four of BLUE’s key projects in Lyme Bay, the Mediterranean, St Helena & Ascension. #L2M2018 pic.twitter.com/UPle3J3jix

Prince Albert and Princess Charlene brought along Princess Gabriella and Prince Jacques for a ceremony yesterday to christen two yachts.

“I was staggered by the beauty and sheer remoteness of Namibia’s incredible landscape. And I was humbled by the dedication of the rangers who protect the unique population of desert rhino from poachers.” — Following a 5am start, The Duke of Cambridge set off with a dedicated team of rangers in Namibia’s Kunene region to track a black rhino (spotting several other animals along the way) and met members of the Kunene People’s Park, a ground breaking initiative supported by @Tusk_org to provide Namibian communities with greater control and benefits from their wildlife #EndWildlifeCrime

Working to #endwildlifecrime - The Duke of Cambridge, as Patron of @tusk_org, visits Mkomazi National Park in Tanzania to see how conservation efforts have helped establish a viable breeding population of 50 black Rhino. Find out more about HRH's visit on @kensingtonroyal

We end this week with another stunning landscape photo from James Ogilvy. Have a great weekend, everyone!

Photos from social media and Getty Images as indicated; Sankei and The Asahi Shimbun via Getty

11 thoughts on “This Week’s Extras”