Princess Marie of Denmark celebrated her 43rd birthday on Wednesday, an event that warrants a dive inside her hat closet! We’re going to start with a look at all of her blue hats: 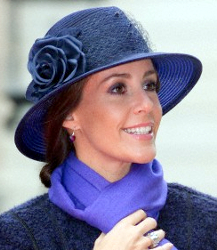 We don’t see Princess Marie wear hats more than a handful of times each year (usually just the Danish Opening of Parliament and major events or state visits) which partly explains why we see just three designs here. The first two designs, in straw and felt, have become workhorses for her and we have seen them worn multiple times while #3 has had just one public outing- something I’d like to see changed, along with a different placement of that hat on the head! What does this trio of blue hats in Princess Marie’s wardrobe say to you?

Photos from Corbis; Julian Parker and Ole Jensen/Corbis via Getty