On Tuesday morning, a tea party for notable persons of the Heisei era was held at the Imperial Palace in Tokyo in continued celebration of Emperor Akihito’s 30 years on the throne. As hostess of the event, Empress Michiko did not wear a hat and as Crown Princess Masako did not attend, the most senior Imperial family member in a hat was Princess Kiko. We don’t associate Princess Kiko with millinery surprises but that’s exactly what she delivered at this event, joining her daughters in the bandeau trend that’s sweeping the globe! 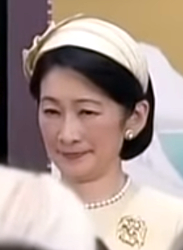 Princess Hisako wore an interesting leaf green flat hat with what looks like square points and feather trim while Princess Tsuguko looked lovely in an orchid purple formed beret (covered in silk, I would imagine) with feathers on the side.

I suspect the emperor’s upcoming abdication has made this anniversary celebration into such a large, multi-day event but no matter the reason, it’s great to see the Imperial family lend their support (and their hats!) and I was particularly happy to see Mrs. Sayako Kuroda  in attendance. I wish we could see better views of the Takamado princess’ hats because they look memorable. Which designs here stand out most to you?

Prince Akishino and Princesses Kiko, Mako, and Kako at the morning tea party for notable persons of the Heisei era on February 26, 2019.
📸 https://t.co/RnlfdejsT0 pic.twitter.com/5NtEaqfSW1