Every Wednesday in May, we will be joined by longtime reader and regular commenter Jake, who lives in Washington DC and can be found on Instagram or Twitter, for a series on Hawaiian royal hats. Jake’s previous series on royal men’s hats and suggestions for hats from the wardrobes of Queen Elizabeth, Queen Maxima, Queen Margrethe and Queen Mathilde warranting repeat have provided both entertainment and education to all of us. Jake- I’m so pleased to welcome you back.

To observe the anniversary of the overthrow of the Kingdom of Hawai‘i on 17 January 1893, I wanted to offer my fellow Royal Hats readers a look at the hats worn by the royals of Hawai‘i, a place many may not know was once a respected nation. While I could just show you photos of various royal hats, I believe not offering any sort of historical context (especially as almost all of these hats are from 100-200 years ago) would be disrespectful to a people and culture quite different from most of our own. Therefore, these posts will be more wordy than usual, offering up small history lessons in the process, but I hope you will still find them interesting. As much as possible, I try to use the native Hawaiian spellings of names and places. And while I did my best to ensure accuracy, I apologize in advance for any mistakes and hope you will correct me as well. So, without further ado, let’s discover these Hawaiian royal hats!

Some of you may be aware that in the 19th Century, Hawai‘i was an independent nation. The Kingdom of Hawai‘i began in 1795 under the rule of Kamehameha I (a.k.a. Kamehameha the Great). The House of Kamehameha ruled for the majority of the Kingdom’s existence before passing to the House of Kalākaua in 1874.

After its unification, Hawai‘i worked to assert its independence after multiple incursions by foreign powers. In 1842, a delegation was sent to the United States and Europe to gain recognition by others as a sovereign nation. The Anglo-Franco Proclamation of 28 November 1843 officially recognized the Kingdom of Hawai‘i in Europe; the Proclamation was signed by Queen Victoria of the United Kingdom and King Louis-Philippe of France (King Leopold I of Belgium urged Louis-Philippe to recognize Hawaiian independence). The U.S. did not sign onto this declaration and it wasn’t until 1849 the U.S. recognized the Kingdom of Hawai‘i. Hawai‘i was the first non-European indigenous nation to be recognized as an equal to the Western powers.

Many people find the genealogy of European royals to be quite intertwined and confusing, but keeping straight who is who in the Hawaiian Royal Family is sometimes even more difficult. The Polynesian practice of informal adoptions, known as hānai was quite common among Hawaiians of all classes, as was the use of multiple names (both formal and informal) and possibly changing names if a name was deemed harmful (i.e. seemed to bring bad luck). Surnames were not used until the 1860 Act to Regulate Names, which worked to codify how children should be named; despite this act, many Hawaiian royals still had multiple name changes in their lifetimes. Therefore, I try to use what is generally considered a person’s most popular name or combination of names when identifying them, whether they are Hawaiian or English names, or both.

With that brief historical introduction to get us acquainted with the Kingdom of Hawai‘i, let’s move into what this blog is all about: royal hats! Traditionally in Hawai‘i, hats have not been a common accessory, although the mahiole feather helmet were worn by the highest ranking men of the ali‘i (Hawaiian noble class); most other hats came from outside influences. As a monarchy that came to be seen as equal to European kingdoms and principalities, Hawaiian royals quickly integrated Western-style outfits and fashions into their wardrobes, which included hat styles common for the 19th Century.

Embracing the West While Maintaining Tradition

King Kamehameha II and Queen Kamāmalu traveled to London in 1824; on the way they met with Emperor Pedro I of the newly formed Empire of Brazil and exchanged gifts. Once in London, they made quite an impression (being dark-skinned, of course), especially as Queen Kamāmalu was over 6 feet tall. While there, they were dressed according to European customs, and a turban worn by Kamāmalu apparently became quickly popular among London’s society ladies.

Unfortunately the King and Queen contracted measles and died in July 1824 in London; they were both only in their 20s. Despite this great sadness, they were the first of multiple Hawaiian royals to visit the U.K. and this helped begin a long relationship with the British Royal Family.  Prince Alfred, Duke of Edinburgh, later visited Hawai‘i in 1869.

Western fashions continued to become more common among the Hawaiian royals, as seen on King Kamehameha IV in a military dress uniform, including ceremonial hat.

His wife, Queen Emma, is shown below wearing a traditional Victorian headdress and bonnet. Queen Emma bonded quickly with Queen Victoria during a visit to the U.K. in 1865, both being widowed at a younger age. Queen Victoria was also a godmother to Emma’s son Albert Kamehameha, who unfortunately died at age 4 in 1862.

A post shared by Royalty Thru The Ages (@royaltythrutheages)

Unfortunately photos of Hawaiian royals remain fairly scarce, but here are some I hope you enjoy:

David Kalākaua, who would later be chosen king, wearing a jaunty straw hat c. 1850 at age 14.

Princess Po‘omaikelani, younger sister of Queen Kapi‘olani (King Kalākaua’s wife) in a small hat with an upturned brim typical of the late Victorian era (below left).High Chieftess Miriam Auhea Kekāuluohi Crowningburg, a second cousin of King Lunalilo, was photographed wearing a beautifully detailed Victorian straw percher hat with floral and ostrich feather trim and ribbons hanging off the back (below right).. 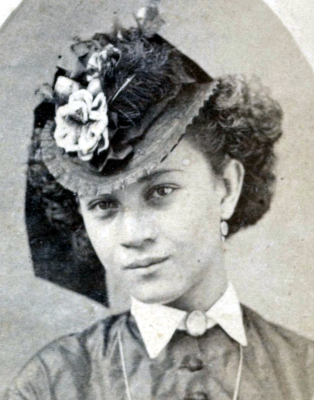 Jake- what a fascinating start to this series and view at some wonderful Victorian hats. I look forward to Part 2 next week!

Images from Getty and social media as indicated; The Bishop Museum; Wikipedia Commons