Prince Henrik passed away peacefully last evening following a short illness. A jovial character, he will be remembered as a  colorful and complicated prince, poet, pianist, diplomat, wine maker, linguist, husband, father and grandfather known for his frank and forthright approach to life and love for his family. We offer Queen Margrethe, Crown Prince Frederik, Prince Joachim and the rest of the Danish royal family wishes for peace and comfort as they mourn his loss. 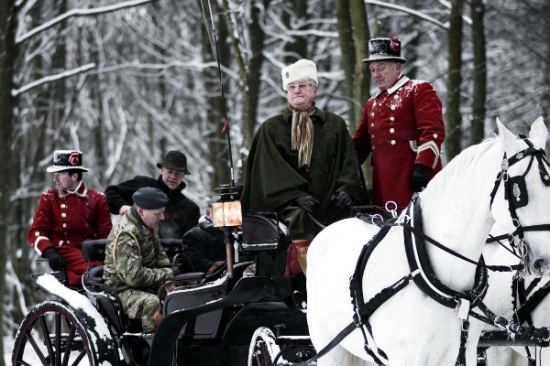 Happy (almost) New Year from Sandringham! The Earl & Countess of Wessex (with her father) joined HM & The Duke of Edinburgh for the Sunday mass. With HUGE thanks to @GeoffRobinson49 for pictures! https://t.co/B1nK8Rkzbj pic.twitter.com/fEU51WjPAS

New millinery designs that caught my eye this week:

And this classic black straw hat with pork pie crown and gently sloped wide brim trimmed with overlapping ginea fowl feather hatband and pearls from Australian milliner Meg Rafter. There are several royal heads I can see looking fabulous in this hat.

Grand Duke Jean of Luxembourg celebrated his 97th birthday and a new photo, with Grand Duke Henri, was released for the occasion (Luxarazzi)

Wonderful photo shared by the King of Bhutan

New years greetings from the King and Queen of Jordan

مع بداية عام ٢٠١٨ من عائلتنا- وإيمان الموجودة في الجامعة- نتمنى لكم جميعا عاما سعيدا
As we begin 2018, best wishes from my family (in addition to Iman who is away at college) to yours pic.twitter.com/G62RY0i6WV

Stunning looks on the Danish royals for the annual New Years and Diplomatic Corps receptions. Princess Mary’s ruby tiara has recently been tweaked into a shape with a slight peak at center and it looks great on her.

And a beautiful final sunset of 2017 paired with the first sunrise of 2018 shared by Prince Nikaloas of Greece. Happy New Year everyone!

Good morning 2018! First rays of light this year. We hiked to the same spot of yesterday, at the southernmost tip of mainland Greece in Mani. After watching the moon set we witnessed the sun rise for the first time this year. All images captured by Light L16 #gratefulfortoday #reasonsilovegreece #thisisthegreecethatilove #mani #capetenaro #capematapan #lightl16

The first week of June, Princess Nobuko of Mikasa wore a larger scale hat to the Yokohama Port opening festival

Queen Margrethe and Prince Henrik arrived in Arhus aboard the royal yacht Dannebrog on Friday for their summer residency at Marselisborg Castle. Queen Margrethe repeated her tan hat.

Queen Margrethe and Prince Henrik arrived in Aarhus on the Royal Dannebrog Yacht to officially start the annual summer season in Marselisbo pic.twitter.com/97wxQFqovI

It looks like a backdrop but it's REAL! 🇳🇴💙 #fjordlife #authorlife #Norway #Norge you're beautiful! 😍💙

The Victoria and Albert Museum in London has a special exhibition on Balenciaga that includes a number of very interesting hats. Have any of you seen it?

Fabienne Delvigne shared a snap of herself in one of her own creations, a lovely white fedora with unique hatband detail

Sneak peek of one of the pictures that will be included in James Ogilvy’s upcoming Nantucket exhibition of landscape photography, shared by the photographer himself.

Clarence House shared this and this picture of the gardens at Highgrove, the Prince of Wales and Duchess of Cornwall’s private home.

Princess Charlene made a balcony appearance for the Feast of St. John with Prince Jacques and Princess Gabriella in tow.

And finally, very sweet snaps of Princess Estelle and Prince Oscar were released this week by the Swedish Monarchy.

This pictures are so cute 😻

Excellent coverage of the Prince Mikasa’s funeral over at The Imperial Family Of Japan blog along with detail and photos of related events (enshrinement of the spirit and grave rites after the funeral).

Princess Mako in a smart grey flannel bumper hat on Friday to honour this year’s recipients of the Order of Culture and the Persons of Cultural Merit.

Prince Louis and Princess Tessy of Luxembourg also shared a photo of their elaborate Halloween headwear. Yesterday, Princess Tessy snapped herself in a cozy winter hat.

The Swedish royal court shared a lovely new portrait of Prince Oscar in a knit cap (don’t miss this side by side comparison of a similar photo taken of his elder sister at about the same age).

News broke this week about a new relationship for Prince Harry. If you read one thing about American actress Meghan Markle, let it be this post on her blog, in her own words. Impressive.

And finally… the much anticipated Netflix series “The Crown” was released this weekend. If you’re able to overlooking some glaring historical inaccuracies (the addition of Wallis Simpson’s presence at the abdication of King Edward VIII, for example), the scale of production is impressive and the costumes are glorious. I’d love to hear what you think of it.

Queen Elizabeth, the Duchess of Cornwall and the Duchess of Cambridge snapped last weekend en route to church in Scotland. Kate’s burgundy hat is a design we’ve not seen on her before (Daily Mail)

A preview of the final section of this year’s amazing exhibition on Queen Elizabeth’s fashion due to open at Windsor Castle today. It looks like the exhibit focuses on ensembles Her Majesty has worn at Windsor and the hat display are designs all worn to Ascot (including the orange one dubuted just this year)

Watch: Queen's chapeau on show! Some of her Royal Ascot hats exhibited at Windsor Castle from Saturday pic.twitter.com/GAB3OJ5gJ2

There are several John Boyd sun hats here that I’d love to see on several British royal heads. And a few more for myself, please.

Countess Gunnila Bernadotte passed away on Monaday. While we did not see the Countess in many hats (just this one at Princess Leonore’s christening), The Royal Court Jeweller has a lovely memorial post looking at her jewels.

Our friends over at Luxarazzi have linked to an interesting look inside preparations for an official dinner at the Grand Ducal Family’s residence, Château de Berg. While the report is not in English, it still provides a great peek inside a working royal palace.

Somehow, I missed the the release of this stunning image of Prince Daniel and Prince Oscar, taken at Crown Princess Victoria’s July 15th birthday celebration. See two others taken the same day here and here.

Prince Harry tried out some Nepalese headwear to great success.

The Grimaldis showed up in a whole lot of Chanel couture for last weekend’s Rose Ball (Daily Mail). Read a great review of the gowns here (Royal Order of Sartorial Splendor)

I’ll do my best to post a review of British Easter hats tomorrow. Following this, I’ll be signing off for three weeks. On Monday and Thursday mornings, there will be an open post for you all to share links to current royal hats and discuss them as usual. I’m relying on you to keep track of royal hat happenings while I am away and thank you all in advance for keeping the conversation going!

Prince Henrik of Denmark hosted a royal hunt at Gribskov in northern Zealand today. Ordinarily, I wouldn’t feature this kind of event in a post but I saw this photo and I just had to share, Not only is Prince Henrik’s white embellished papakah wonderful (especially with his cape and most regal of poses) but the entire hunting scene looks like it was lifted straight from the 19th century. 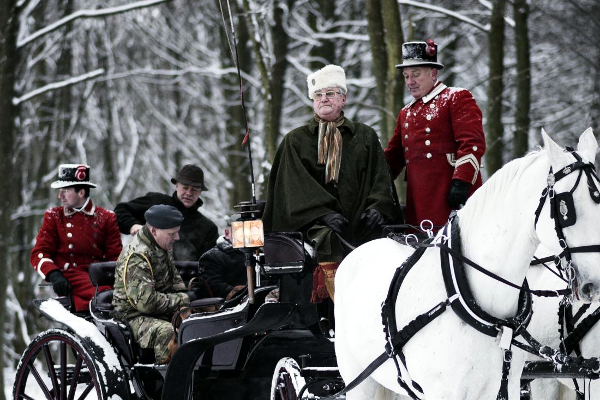 It’s fascinating how the royals manage to keep multiple layers of tradition (including hat wearing!) alive.