The Danish Royal Family welcomed Vietnamese president His Excellency Truong Tan Sang and Madam Mai Thi Hanh on a state visit to Denmark this morning (a video of the arrival can be viewed on the Danish Royal website here),  For this welcome, Queen Margrethe repeated the turquoise blue beret-style hat we saw her wear just last weekend in Sweden. Today’s photos however, revealed an element of this hat more clearly than we have seen it before- notice the stripe of beaded trim running diagonally across the hat (most visible in the third photo). It adds a bit of sparkle and interest, doesn’t it? I continue to really like this hat for Queen Margrethe.

Crown Princess Mary repeated one of her most frequently worn hats- a black wool picture hat with square crown, black straw brim and double feather trim. It is a versatile, clean and modern hat that looks great on Mary, particularly when she wears her hair in a chignon as she did today. I also really loved it paired with her teal blue coat.

Princess Marie repeated the hat she last wore in May for Prince Nicolai’s confirmation. A close look at this hat (see here) shows it is actually a navy straw fedora with a net veil wrapped around the crown and a silk flower on the side. I like to think of it as a “dressed up” fedora and I like it very much on Marie.

Princess Benedikte repeated her fuschia pink straw wide-brimmed picture hat but instead of wearing the brim down as she did last time, she turned it up on one side. I always thought the colour and shape of this hat was wonderful on Benedikte and seeing the added versatility of the brim today made me love it even more. 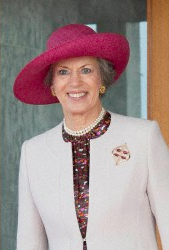 I thought the Danes’ millinery choices were fantastic today- certainly better than what we saw their Swedish cousins choose yesterday.  Which hat in Denmark today was your favourite?

Photos from Splash News via Corbis;  Keld Navntoft/Scanpix via Kongehuset