Emperor Akihito and Empress Michiko hosted a Spring Imperial Garden Party at Akasaka Gyoen Imperial Garden yesterday. The Empress, shown leading the Imperial Family to the party below, wore a pale blue saucer hat trimmed with a large bow. When it comes to Michiko’s saucer hats, I think bigger is better and any departure away from her preferred grey ensembles is a winner for me.

Princess Kiko and Princess Mako of Akishino (The Emperor and Empress’ daughter-in-law and granddaughter) wore a pair of traditionally shaped hats. Princess Kiko’s hat in fresh green included several coordinating bands around the crown while Princess Mako’s white bowler was trimmed with a band of yellow ribbon studded with yellow flowers.

Three of the Takamado Princesses, seen at the top left in the photo below, were also in attendance. Princess Hisako wore a jaunty beige-cream bowler with squared crown and large spray of flowers and feathers on the side. I thought this hat came to life with this embellishment and while the colour was a little bland, made it a fun hat. Princess Hisako’s eldest daughter, Princesses Tsuguko, wore a navy pillbox with pork pie indented crown. The photo above shows a rather twee bow on the back of this hat- an embellishment I think this hat would be better without. Tsuguko’s younger sister, Princess Noriko, wore a pale butter yellow hat with what looks to be a mass of ribbon blooms at the back (see the photo above for a better look). While the shape and colour of this hat were rather nondescript, the ribbon flowers made it come to life and Noriko gave it some additional personality by wearing it at a a slight angle.

Princess Akiko and Princess Yoko (nieces of Emperor Akihito), rounded up this Imperial group. Princess Yoko, seen in blue in the center of the photo above, wore a white hat trimmed with blue puffs (carnations? pompoms?) to match her suit. Princess Akiko, seen below at the right, wore a dove grey pillbox.

The hats yesterday were all rather predictable but together, made up a lovely bouquet of millinery in classic spring colours. Are there any hats that stood out to you as your favourite? 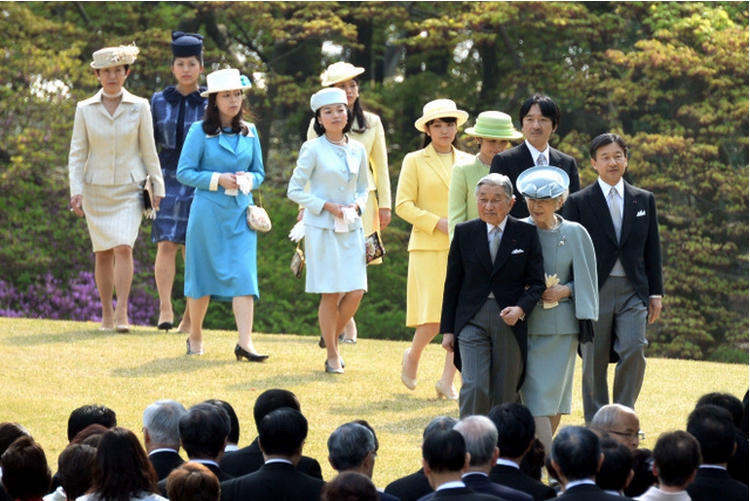 Photos from Getty as shown and Asahi Shimbun via Getty