Queen Máxima of the Netherlands is well-known on this blog for her dramatic hats. One of the hat shapes she has embraced in recent years is the ‘slice’- a picture hat with the brim folded sharply upward on one side and downward on the other to create a hat that appears to sit diagonally on the wearer’s head. One of my favourite of Queen Máxima’s ‘slice’ hats is a natural straw version designed by Fabienne Delvigne. Máxima has paired this hat with four different dresses and a pant suit – I am curious, dear readers, which pairing do you think was most successful?

Look 1:  With an orange organza pleated dress for the Monaco royal wedding, July 2, 2011 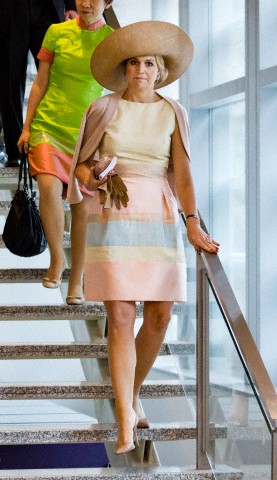 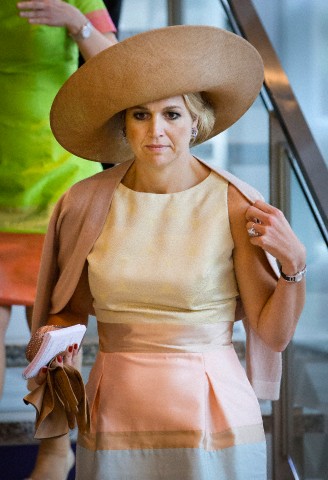 Look 4: Queen Máxima also paired this hat with a monochrome bowed blouse and trousers in May this year for the Cordaid centenary.

UPDATE: Since this post was initially published, Queen Máxima has worn this hat with the following looks:

Look 5:  with an aqua and gold printed dress to celebrate the 200th Anniversary of the Kingdom of the Netherlands in Maastricht on August 30, 2014.

UPDATE: Look #6: A surprise pairing with a Claes Iversen silk blouse and embroidered skirt for Prinsjesdag on September 20, 2016 which elevated the hat into super formal wear.

Look #7: With a textural, open-weave Natan dress on October 10, 2017 while on state visit to Portugal

Look #8: With a purple embroidered Natan dress on June 21, 2018 to open a new building and on September 27, 2018 to launch an anti-loneliness campaign

Look #9: With a an orange draped midi Natan dress worn September 17, 2020 for a visit to South East Friesland

39 thoughts on “One Hat, Seven Dresses, Trousers And A Gown”