The Imperial Royal Family are among the most prolific of royal hat wearers- so prolific that we have to break their 2014 millinery review into two posts. In cases where a hat was worn repeatedly 2014, it is shown here just once (usually, the most recent outing) and you can click on each hat to take you to the original post with larger views and detailed information. Without further ado, here are the hats we saw worn by all of the Japanese princesses in 2014: 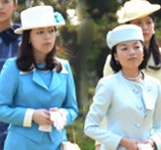 I think the collection above shows more creativity, diversity and colour than we might have expected. Will any of these hats receive your nomination for favourite royal hat of 2014?

Stay tuned tomorrow for a look at all the hats worn by Empress Michiko.