Queen Elizabeth hosted her second garden party of this summer season yesterday in the grounds of Buckingham Palace. For this event, she was vibrantly attired in her mauve square crowned, rolled brim hat with wide mint green hat band and brim edging. While I have always wanted to like the fuschia, pink and green feathered blooms adorning this piece, it just reads too costumey for me to embrace.

The Duke of Edinburgh was his dapper self in an antique silk top hat, shown off to full effect with a dotted tie.

The Duchess of Cornwall topped her neutral coat dress with her cream straw hat with up-swept brim. The gentle curve in this design is shown off so well with this delicate windowpane straw and while it’s huge in scale, Camilla pulls it off. I think, however, I prefer this hat paired with a more colourful ensemble.

Princess Anne repeated the ecru straw hat she first wore to Ascot last year. With a double crown wrap in chocolate straw and ruched duponi silk, a chocolate straw underbrim and a mass of feathers at the side, there is a lot happening visually with this piece. I think, however, the muted colour palate and pairing with Anne’s simple ecru bouclé suit balances the hat and maybe even makes it work.

The Duke of Kent wore a grey felt top hat while his sister, Princess Alexandra, surprised in a new design. In white straw, the picture hat features a wide, flat brim and domed crown with straight sides. Trimmed with Alexandra’s signature swath of tulle net, the hat is also decorated with what looks to be a striped green and white bloom on the side. 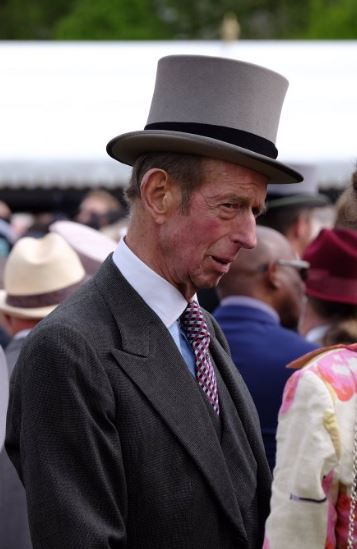 What hats stood out to you most at this event?

Photos from Getty as indicated and The British Monarchy