Princess Mako formally announced her engagement to Mr. Kei Komuro, a lawyer she met  in 2012 while attending International Christian University in Tokyo.  Princess Mako arrived at the Imperial Palace in a pale turquoise calot hat with silk floral trim at the side that she removed for the press conference. It’s a typically demure design that while unexciting, is a lovely colour on the young princess. 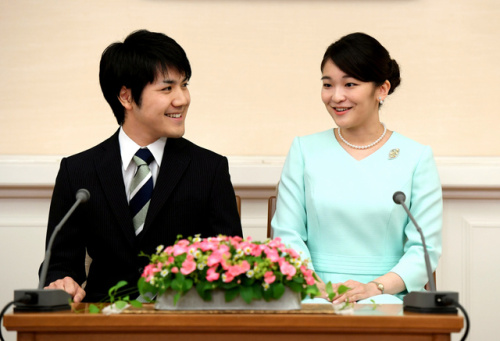 Designer: unknown
Previously Worn: This hat is new
The young couple is expected to marry sometime during the autumn of 2018. Princess Mako’s royal status will end with her marriage, although I suspect we’ll still see her from time to time at family events (as we do with her aunt, Sayako Kuroda and cousin, Noriko Senge)
Photos from Asahi and Asahi