The 30-year Heisei reign officially ended today with the abdication of Emperor Akihito. The abdication ceremony was held in the Imperial Palace in Tokyo.

Crown Princess Masako looked radiant in an exquisite new hat. The design features a domed crown covered in pearlescent silk and a lace covered bumper brim- the same scroll patterned lace as was on her gown. The hat shape works well with the high collared gown and the pieces combine to make an elegant and very regal look. 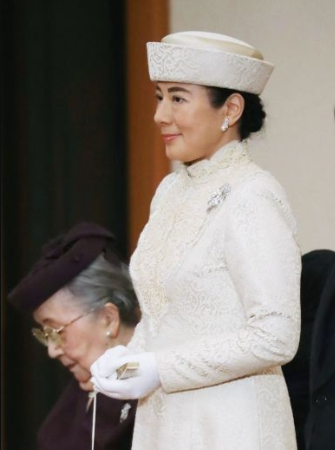 Princess Kiko repeated a bumper hat in palest celery green silk. The raised brim is overlaid in the same lace as on Kiko’s gown. I prefer Kiko in more saturated colours but it’s not surprising to see her in a pale hue for such high profile events. The lace overlay on the hat’s brim provides a lovely, textural frame around Kiko’s face. 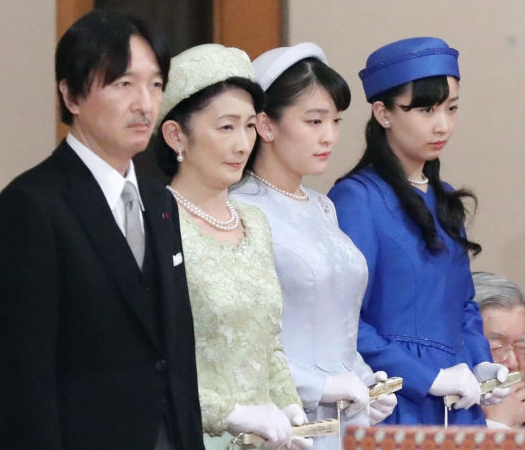 Princess Mako repeated a cuffed calot hat covered in the same ice blue floral printed jacquard silk as her gown. The blue silk flowers that adorned this hat at its first outing are visible in the photo below.

Princess Hanako wore a pillbox hat with domed crown, wrapped in a pleated silk wrap (or bumper brim?) and trimmed with a multi-looped bow. I believe this hat is new (the gown was paired, at its last outing, with a different hat). Princess Hisako repeated the deep purple bumper hat with ostrich feather pouf at the back we last saw her wear at the 2015 New Year’s Poetry Readings. Princess Tsuguko repeated the burgundy silk covered beret she wore for the 30th anniversary celebration of the emperor’s reign back in February. This view shows lavish floral and feather trim on the side of the design and a burgundy net veil that, I suspect, swaths the entire hat.

Princess Yoko topped her mint green silk gown with a matching veiled percher hat worn at a wonderfully rakish angle on the side of her head. The ensemble has a vintage, 1940s vibe to it that she wears very well. Princess Akiko repeated her lime-yellow silk gown with matching bumper hat with what looks like inlaid silk stripes on the side of the raised brim. Princess Nobuko paired her pale sage green silk gown with a matching brimless hat trimmed with a large ecru silk flower and veil. Princess Yuriko (Yoko and Akiko’s grandmother) repeated her deep eggplant purple, low profile bumper hat with bow at the back. 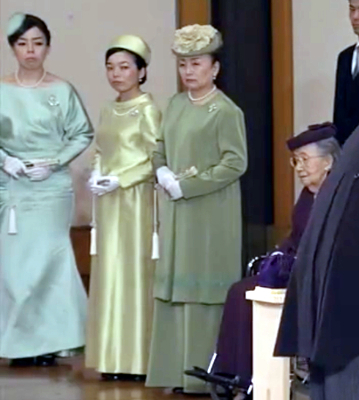 The Imperial royals know how to do retrained, elegant looks better than any other royal house and today was no exception. You can watch highlights of today’s abdication ceremony here along with commentary and an interesting overview of the Emperor’s life (start at 12:00). In recent days, NHK World also broadcast a 3-part documentary on Emperor Emeritus Akihito that I found informative, enjoyable and highly recommend:

Part I: Emperor of A Defeated Nation
Part 2: The Two Of Us
Part 3: The Symbol Of A Nation

The Reiwa reign of Emperor Naruhito began at the stroke of midnight (Japanese time) on May 1. His enthronement ceremony will follow tomorrow.