When Prince Christian of Denmark was christened ten years ago, the event was attended by numerous royal relatives and close friends. After looking at the hats worn by his mother, grandparents and godparents, we now turn our attention to those worn by royal guests.

Princess Marie-Chantal wore a Philip Treacy designed fascinator of straw twists and several different varieties of gold feathers. While some might argue that the spiky design gave some textural contrast to her tweed coat and dress, I have always found the combination of classic clothing and modern headpiece to be jarring and disharmonious.

Princess Alexia of Greece topped her grey fur jacket with a burgundy felt hat. With an indented crown and fluted, upturned brim, this hat is all about shape. I adore the grey and burgundy colour scheme of her ensemble but I’m afraid the stylised brim and crown shapes on her hat look rather dated today. Tatiana Blatnik (who would become Princess Tatiana of Greece and Denmark in 2010) wore a simple fascinator of navy feathers. The lightness of the piece, which feels better suited to a summer wedding or garden party, feels off balance against her winter coat

Princess Theodora wore an interesting loden green beret variation with high peaked side trimmed with a felt rose in the same colour. Dutch Princess Laurentien also wore an exaggerated hat- made of the same brown plaid as her tailored jacket, the piece featured a tall, indented crown and oval shaped brim. Unfortunately, the oversize fedora was too big for Laurentien and looked to be swallowing her up. In this pairing of exaggerated hats, I think Princess Theodora’s was substantially more successful. 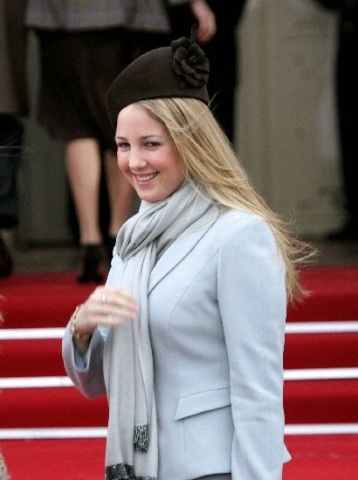 Princess Mathilde (as was her title in 2006) topped her beautiful red coat dress and cape with a large matching hat. With a squared crown and upfolded brim, the hat was simply trimmed with a wide ribbon around the base of the crown. It’s a strong look for Mathilde but she carried it well. It’s a classic piece that I would love to see trotted out again.

Princess Märtha Louise of Norway wore a 1940s inspired hat by Anja Irgens. With a close fitting crown and diamond brooch detail, the star of this hat was its upfolded brim that swept around the hat in fluted waves. Märtha Louise has long been known for her quirky style and while this hat fits that style brief, the colour and shape are exquisite. Ten years later, it is still one of my favourite hats in her wardrobe. 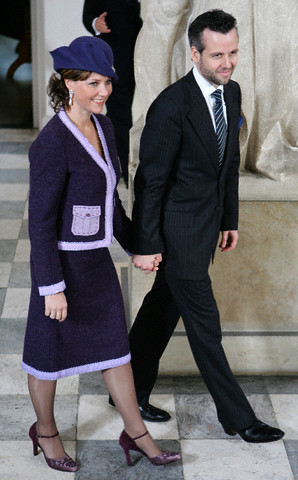 Princess Benedikte’s daughter, Princess Alexandra of Sayn-Wittgenstein-Berleburg topped her gold bouclé coat with a purple fascinator. The headpiece, consisting of a purple silk rose and feathers that swept around the top of her head, provided a spot of colour and textural contrast to her ensemble. The Countess of Frederiksborg, who arrived with her young sons Prince Nikolai and Prince Felix, wore in an ivory felt hat with asymmetrical upfolded brim. The hat was trimmed in a pleated sash of the same fabric as her coat, drawing the two pieces together in a unified winter white ensemble. Some of you might recognize the hat as the same one worn for Prince Felix’s christening (the last christening to have taken place in the Danish royal family at the time) in 2002- an interesting choice but a hat that Alexandra wore very well. 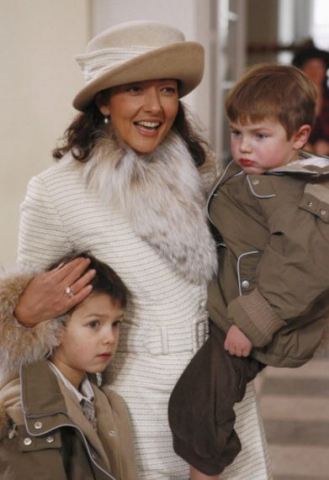 It is only once in a generation that a royal house christens a future king or queen and the scale of this event reflects its importance. Looking back, I’m surprised at how many hats withstand the test of time and could successfully (and stylishly) be repeated today. Which hats stand out most here to you?
Photo from Getty as indicated; Ddp Images; CHRISTIAN CHARISIUS/Reuters/Corbis; Kay Nietfeld/dpa/Corbis; Mark Renders via Getty; CHRISTIAN CHARISIUS/Reuters/Corbis; Birger Storm / Billed Bladet;  LEBON/Gamma-Rapho via Getty Images

The wedding of Prince Carl Philip of Sweden and Sofia Hellqvist yesterday also saw a number of guests from non-reigning royal houses. Representing the Greek royals, Princess Tatiana wowed in an exquisitely beaded Celia Kritharioti gown in dove grey. The light gown was perfectly complimented by Tatiana’s small diamond tiara, a piece not previously seen before. I hope this is a permanent addition to Tatiana’s jewel vault because the proportion, scale and delicacy of it are lovely on her. 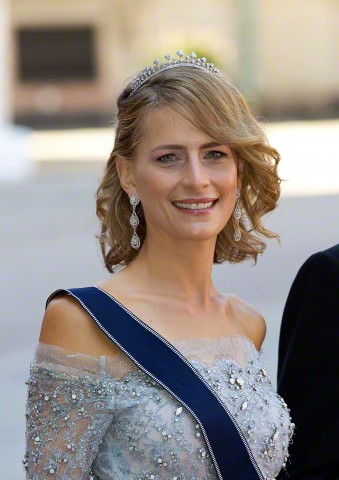 One of the biggest tiara surprses at this wedding appeared on Princess Ursula of Bavaria. While the scrolled diamond tiara looked lovely on her, it is eerily reminiscent of the famous Spencer tiara. The Bavarian royals have sent several larger tiaras to auction in recent years and this piece has a few royal jewel watchers wondering if it is a new purchase or has been pulled out from the depths of the family vault.  Its history aside, this tiara is a beautiful one that I thought would have benefited from either Ursula’s large drop earrings or multiple strands of pearls but not both.

Princess Ursula’s daughter-in-law, Princess Anna of Bavaria, repeated the small diamond fringe tiara we saw her wear to Princess Madeleine’s wedding two years ago. This time, however, she paired it with a grand up-do which showed the piece to much greater effect. With her dramatic diamond earrings and navy and silver dress, Anna looked stunning.

That covers our review of all the tiaras worn by guests at the Swedish royal wedding! Stay tuned for a final post with all the official wedding portraits to tie up coverage of this event.

Princess Beatrice dressed up as a Christmas Pudding. With cream dollop and holly sprig on her head. (The Daily Mail)

British Milliner Jane Taylor is clearing out this union jack printed pillbox for only £40. Don’t you think one of the York princesses should buy it?! (Jane Taylor Millinery)

Danish and Greek royals out for a Christmas stroll (Billed Bladet)

First peek at the new Prince and Princess of Monaco! (The Daily Mail)

Princess Tatiana of Greece and Denmark (née Tatiana Ellinka Blatnik) celebrates her 33rd birthday today. Before marrying Prince Nikolaos of Greece and Denmark in 2010, Venezuelan born Tatiana worked in the public relations department for designer Diane von Fürstenberg (whose son, Alexandre used to be married to the sister of Princess Marie-Chantal of Greece). The couple make their home in London where, according to reports from last February, Tatiana is studying to become an eating disorders counsellor. While we see her at major Greek and Danish royal events, Tatiana is another royal who has worn just two hats in public (what to do about these non hat wearing princesses?!). Since I’m planning to cover these two hat events in coming months, that leaves us without a hat to celebrate her birthday today. We don’t have a hat but we do have a flower. For the Duke and Duchess of Cambridge’s pre-wedding dinner on April 28, 2011, Tatiana tucked a purple orchid into her hair. The effect, combined with a diamond necklace trailing down her back, was breathtaking.

Photo from Matthew Lloyd via Zimbio

Like the Danish Royal Family, the current Greek Royal family are cousins to the Swedish Royal Family (yes, it’s all a big web of connected families in the older generation of European royals). Therefore, there was a large group of Greek Royals who attended this wedding. Crown Princess Marie-Chantal wore her teenage daughter Maria-Olympia’s Fringe Tiara (see here for further explanation). It’s a tiara Marie-Chantal has worn many times and it looks just great on her (I think that’s because it compliments her oval-shaped face so well). Matched with her very chic dove grey gown today, the look was modern and exceedingly elegant.

Princess Tatiana wore the Antique Corsage Tiara, the same tiara she wore for her own wedding three years ago.  It is a delicate piece that looked good with her up-swept hair and flowing pale blue organza gown.

Princess Theodora wore the tiara her older sister Alexia usually wears, a mystery tiara known only as Queen Annemarie’s Diamond Tiara. With an intricate floral motif and interesting, pointed top (almost like a fringe tiara), I think this is a beautiful tiara. Too bad it was outsparkled by Theodora’s disco ball dress and stringy hair.

Photos from Scanpix and Stella Pictures via Svenskdam; and Pascal Le Segretain and Vittorio Zunino Celotto via Zimbio